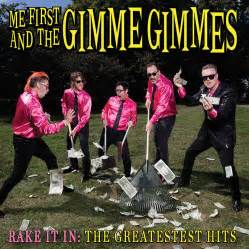 “Rake It In: The Greatestest Hits”
Me First and the Gimme Gimmes
Fat Wreck Chords
Tracks: 17

Everyone’s favorite punk rock cover band, Me First and the Gimme Gimmes have compiled 17 tracks spanning their 8 studio albums for their very first greatest hits album. Simply titled “Rake It In: The Greatestest Hits” the album documents the bands 20 years together through a variety of reworked pop, country and R&B hits that will have you immediately singing along singing along.

If you were at all keyed into the mid 90’s revitalized punk scene then you surely at some point came across Me First and the Gimme Gimmes. The band which consists of a variety of members from various Fat Wreck Chords bands including NOFX, Lagwagon and No Use For a Name have been putting their signature spin on pop culture tracks since their first official release in 1997. From John Denver’s American Classic “Country Roads” to Billy Joel’s “Uptown Girl” and Kermit the Frogs “Rainbow Connection” you get a little bit of everything the band has to offer in sleek package.

It was really great revisiting a lot of these renditions as it had been some time since hearing quite a few of these tracks. Each performance serves as a unique and fitting tribute to the originals making for an extremely fun listen. It would have been nice to have included some new material giving those who already have all the albums something more than just a glorified mix tape however, like the title implies why work when you can just sit back and “Rake It In”.