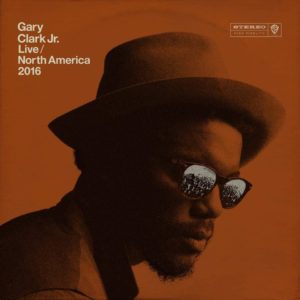 To coincide with Gary Clarke’s guest appearances during Eric Clapton’s 50th anniversary shows at Madison Square Garden and at The Forum in Los Angeles in mid March comes the guitarists latest live recording titled “Live North America 2016”. The album is being released via Warner Bros. Records and includes all new and unreleased live recordings from Clark’s 2016 tour which was in support of his acclaimed 2015 release “The Story of Sonny Boy Slim”.

Live recordings can often be hit or miss. Despite the recent advances in digital recording the main brunt of the work still falls on the artists to put forth a worthwhile performance. In the case of the latest Gary Clark Jr. album “Live North America 2016” is mostly all hits. Clark’s performance throughout the albums 12 tracks captures the listener’s attentions and holds it close. Tracks like the soulful “The Healing” and “Down to Ride” showcase Clark’s talents as both a player and vocalist while songs such as “When My Train Pulls In” and “Numb” capture a grittier side of Clark’s musical pallet.

Though I found the albums overall mix to be a touch off at certain points you have to know going in to a live album that there are going to be some audio short comings as there are multiple factors that come in to play with this type of set up some of which are not favorable for recording. However what is consistant across the albums 70 plus minute run time is the musicianship shown by Clark and his band. Each of the twelve performances that make up this album is sure to have something for every listener out there making it worth checking out.