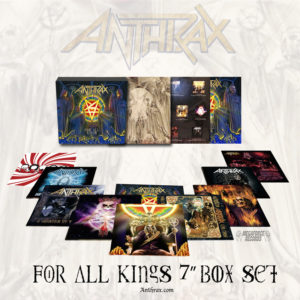 Available exclusively in North America via Megaforce Records is the limited edition “For All Kings 7-Inch Box Set” (Megaforce Records). Released in conjunction with the band’s upcoming Spring co-headline tour with Killswitch Engage the set box set includes 10 7-inch vinyl discs featuring 20 songs – the 11 finished album tracks, two brand new covers (The White Stripes’ “Black Math” and the classic Kansas song “Carry On”), six demos from the “For All Kings” track listing, and “Vice of the People,” a bonus track previously released only in Japan.

Anthrax fans still clamoring for more after the 2016 release of “For All Kings” are certainly in for a treat with this limited edition box set. Not only do you get all the “For All Kings” tracks but you also receive the demo version of the songs contained on the flip side of each seven inch. This was a feature I really enjoyed because you could compare the finished album track with the bands initial idea. Pretty neat if you’re a hardcore music nerd like me. If that wasn’t enough the band made sure to throw in some new material as well including a covers seven inch which contained easily my favorite track from the set a cover of Kansas’s “Carry On” which was paired with a unique rendition of the White Stripes track “Black Math”. That’s still not all as the band chose to also include “Vice of the People” a song originally not released in the States along with a bunch of great artwork by Douglas Heusser and Stephen Thompson, as well as band photos by Jimmy Hubbard.

The big question you might ask “is this worth the $79.99 price tag?” To that I have to say if you already have the “For All Kings” album and are happy with that you may want to save your cash and get a ticket for “Kill-Thrax” spring tour as they might not be enough “new” material here for you. However if you loved the album and want to revisit it in seven inch vinyl formatting, check out the new exclusive art work and add an extremely rare edition to your collection of metal vinyl then Yes! Clean out that bank account and purchase yourself a copy of the “For All Kings 7-Inch Box Set”.