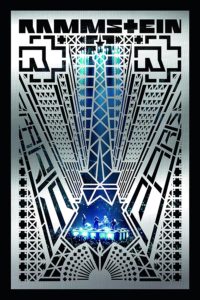 German industrial metalers Rammstein are set to release a new concert film on May 19th titled “Rammstein: Paris”. Shot over the course of two nights at the Palais Omnisports arena in Paris in front of 17,000 by Swedish director Jonas Åkerlund the film features 22 songs from the band’s expansive repertoire. The end result is not only the most spectacular collection of imagery from one of Germanys most successful bands, but also a masterpiece of music cinema, capturing Rammstein’s energy as a unique visual and sonic experience.

Being no stranger to Rammstein’s concert films featuring the bands over the top theatrics I was very eager to check out the band’s latest release “Paris”. Needless to say I was not disappointed. From the bands over the top entrance which has them walking through the crowd in a stoic procession like fashion before being lifted up to the rafters by industrialized scaffolding to the closing number “Pussy” which features front man Til Lindemann mounting a phallic like device only to douse the crowd in a mystery substance as it moved across the front of the stage. No one does a live show quite like Rammstein and I am sure attempting to film a show this immense was no small feel however director Jonas Akerland and his crew nailed it making this one of the better live releases from the band.

Though I found some of the special effects used to be a bit too much causing portions of the film to be difficult to watch due to their frantic nature “Rammstein: Paris” is a film fans of concert DVD’s have to check out. Having seen a large amount of live films from all different genres I don’t think I have seen any other band take such a cinematic approach with their filming. Lots of different angles and top notch sound made up any short comings I may have found. With the variety of formats the concert is set to be released in you owe it to yourself to check one out.