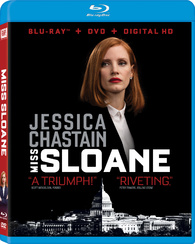 I am not sure what is going on with Jessica Chastain recently. “Miss Sloane” is a film that I didn’t even hear about much until it hit Blu-ray. I mean this woman is easily one of my favorite female leads. I love her range and she just really act. Chastain’s performance in “Miss Sloane” is on par with that except the film overall didn’t interest me at all. But not honestly surprised with a topic like lobbying…zzzz. I guess that’s why you have to look for films with content not just good roles cause this film will become forgotten in no time flat.

Official Premise: Jessica Chastain gives a Golden Globe®-nominated performance in this suspenseful story set in the high-stakes world of American politics. Brilliant, ruthless Elizabeth Sloane (Chastain) is Washington’s most sought-after lobbyist. But when she faces her most formidable opponent yet, she risks everything – even her career – in this illuminating story about power and the desire to win at all costs.

Te film is well shot, so the 1080p transfer looks solid for what it is. Same goes for the audio DTS-HD Master Audio 5.1 track. Both solid. The special features are lacking and flat like the film. There is only one featurette included called “Lobbying: Winning at Any Cost”, which features behind-the-scenes content and interviews. Lastly there is a theatrical trailer included.