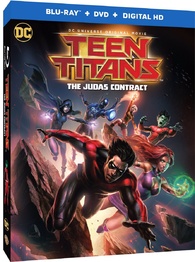 “Teen Titans: The Judas Contract” is the sequel to “Justice League vs. Teen Titans”. The DC Universe animated original movies have been stepping up their games. This one had a slightly more grown-up feel for our Teen Titans. The voice cast is great Stuart Allan returns as Robin, Taissa Farmiga as Raven, Brandon Soo Hoo as Beast Boy, Jake T. Austin as Blue Beetle, Kari Wahlgren as Starfire and Sean Maher as Nightwing. Some new talent includes Christina Ricci as Terra, Miguel Ferrer as Deathstroke, which is also his last role since he died earlier this year, Gregg Henry plays Brother Blood, Meg Foster as Mother Mayhem and even Kevin Smith plays himself in the film. It was a fun film and “Teen Titans” as a product is very hot right now! I give it a thumbs up for sure!

Official Premise: Led by Starfire, the Teen Titans – Beast Boy, Raven, Blue Beetle, Robin and the just-returned Nightwing – have built a cohesive team in their never-ending battle against evil; but their newest teammate, the mysterious, and powerful Terra, may be altering that dynamic. Meanwhile, an ancient evil, Brother Blood, has awakened, and familiar foe Deathstroke is lurking in the shadows – both waiting to pounce. Ultimately, the Teen Titans will need to battle their enemies and their own doubts to unite and overcome the malicious forces around them, in this twisting tale of intrigue, adventure and deception.

“Teen Titans: The Judas Contract” comes as a Blu-ray + DVD + UltraViolet combo pack. Special features are not jam-packed but worth taking a look. First up “Titanic Minds: Wolfman and Perez” is a documentary exploring the relationship of Marv Wolfman and George Pérez talking about Teen Titan history. “Villains United: Deathstroke” is a short featurette on the villain. There are two bonus cartoons in “From the DC Comics Vault”. Lastly, there is a sneak peek at the next DC Universe Original Movie, “Batman and Harley Quinn”, with the creators and voice cast.