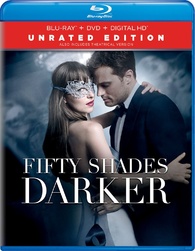 I do not understand the thrill of the “Fifty Shades of Grey” series. The first film is a melodramatic turd and the second film is honestly worse. The “steamy scenes” in the film are not sexy at all and nearly laughable. Watching this film was petty painful to be honest. Jamie Dornan and Dakota Johnson are fine in the film and do what they can with this mess but I wouldn’t waste my time on this…just watch a damn porn, LOL. The production though is decent and you can tell that they were trying harder this time but it’s a hard pass for me…and to think there is still another sequel coming.

Official Premise: Jamie Dornan and Dakota Johnson return as Christian Grey and Anastasia Steele in Fifty Shades Darker, the second chapter based on the worldwide bestselling Fifty Shades phenomenon. When a wounded Christian tries to entice a cautious Anastasia back into his life, she demands a new arrangement before she will give him another chance. As the two begin to build trust and find stability, shadowy figures from Christian’s past start to circle the couple. Jack Hyde (Eric Johnson) and Elena Lincoln (Kim Basinger) join the cast, determined to destroy the couple’s hopes for a future together. This time there are no rules.

This Blu-ray includes an unrated cut of the film. Personally the film is long enough running 117 minutes but this new cut expands it out to 131 minutes. If you enjoyed the film you might be interested in more, but I’m not. Despite whether or not the film is worth watching, the A/V presentation is extremely solid. The 1080p transfer looks amazing and really crisp colors. The real shocker here is definitely the DTS:X Master Audio soundtrack. Normally, I would say a film like this wouldn’t need a track like this but it really does sound great. From the film’s music to the subtle sound effects throughout. It is really solid.

“Fifty Shades Darker” comes with some solid special features including contains six featurettes, a two short deleted scenes, and a preview for the next film, “Fifty Shades Freed”…very short. “Writing Darker” features the author E.L. James talking about the book and the film. “A Darker Direction” features cast and crew talking about this sequel. “Dark Reunion” looks deeper into the characters. “New Threats” looks at the films new characters. “The Masquerade” looks at the films party sequence. Lastly “Intimate with Darker” looks at the sex scenes both filming and physical meaning.