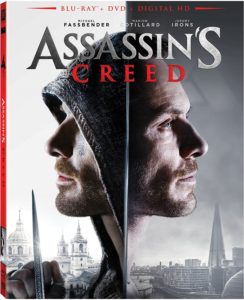 “Assassin’s Creed”, which first started as a video game, was a game that I liked but never really loved. Cool idea, deep mythology behind the characters and events of the games. Unfortunately nothing I just mentioned there was transferred into the feature film version of the game. Very disappointing in fact. I was not only uninterested in the film but flat out bored at parts. Usually, Fassbender’s roles interest me much more but this was a lame attempt all around. Who knows, if you are a die hard fan of this game, you might dig this (or hate it much more than me) but it was long and yet at the same time didn’t deliver anything worthwhile to fill that time well.

Official Premise: Cal Lynch travels back in time to 15th-century Spain through a revolutionary technology that unlocks the genetic memories contained in his DNA. There, he lives out the experiences of Aguilar de Nerha, a distant relative who’s also a member of the Assassins, a secret society that fights to protect free will from the power-hungry Templar Order. Transformed by the past, Cal begins to gain the knowledge and physical skills necessary to battle the oppressive organization in the present.

Blu-ray presentation is impressive for sure. The 1080p transfer looks solid with the visual effects but I believe that the 4K presentation would be the better way to go if you truly need to see this film. The DTS-HD Master Audio 7.1 track also delivers the goods with action scenes, when they show up. Special features are light in addition. First up is “Take the Pledge: Behind the Scenes of Assassin’s Creed”, which is a complete behind-the-scenes coverage of the film. Fairly in-depth. Lastly there is a feature called “Conversations with Director Justin Kurzel” and a large amount of deleted scenes included.