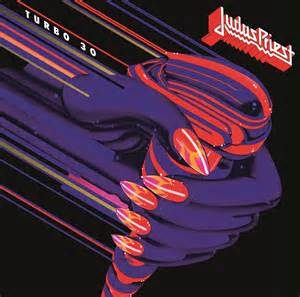 British metal legends Judas Priest are set to reissue their 10th studio album “Turbo”. Originally released in 1986 the album incorporated a variety of new technical inventions which allowed the band to challenge their creativity and push their sound as a band forward. “Turbo 30” is being released via Sony Music and features recreated album art work, a re-mastered version of the “Turbo” album and an unreleased 2 disc live recording from the bands 1986 “Fuel For Life” tour.

Having reviewed the bands last reissue/live release I was anxious to delve into “Turbo 30”. The band and Sony spare no expense to make sure these re-releases are top notch and not just an opportunity to sell their back catalog. From the quad fold packaging to the recreated artwork and original photos just the looks alone of this release are enough to make me recommend it. Disc one of three features a re-mastered version of “Turbo” featuring tracks such as “Parental Guidance”, “Locked In” and “Turbo Lover”. Despite being an analog purist the re-mastered version of the album did sound quite good however, were the release really shined was in the bonus two disc live recording. Much like the re-issue of “Defenders of the Faith” in 2015 “Turbo 30” includes an unreleased live performance from the albums subsequent tour. These live recordings sound amazing and just shred through your speakers as they capture the band in their natural environment. Not only do you get live versions of songs from the featured album but you also get fresh versions of some of Priest’s biggest hits including “Heading Out to the Highway” and “Breaking the Law” to fan favorites “The Sentinel” and “Electric Eye”.

As Priest albums go “Turbo” is probably one of the least re-guarded of the bands 17 studio albums however, the presentation and the inclusion of the unreleased live performance on this 30th anniversary edition make it a decent pick up. Even fans who may dislike the studio album portion of the release will appreciate the quality of disc 2 and 3 as the band sounds great.