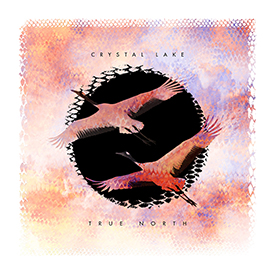 Japanese hardcore/metal band Crystal Lake has just released a brand new full length album titled “True North”. The album (the bands 6th full-length) is being released via Artery Record in the United States features 10 tracks which blend and blur a mixture of unique styles and sounds which instantly sets them apart from other bands in the genre.

Being somewhat unfamiliar with Crystal Lake I jumped in blindly as I hit the play button. Right away the band had my intention as the albums opening track “Alpha” teases your senses with underlying synth rhythms before hitting you like a ton of bricks. Vocalist Ryo Kinoshita pushes his voice to the near edge on tracks like “Omega” and “True North” while tracks like “Breathe Deep” and “Metro” showcase the bands diversity and musicianship as they bounce between light melodic verses, aggression fueled choruses and fist pumping breakdowns providing a unique rollercoaster like listening experience. Even if you are not a fan of heavy music there is enough substance in “True North” to make this a worth-while listen.

Despite finding some of the sound structures a little redundant mainly in the way of the albums electronic elements it wasn’t enough to pull my attention away from the core elements of each song. For fans of heavy music looking for something a little different give the latest offering from Crystal Lake a try as you won’t be disappointed.