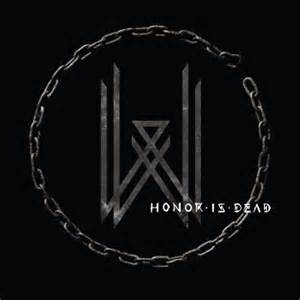 Metal Blade recording artist Wovenwar are back with their sophomore release titled “Honor Is Dead”. The group which consists of former As I Lay Dying members Nick Hippa, Josh Gilbert, Phil Sgrosso and Jordan Mancino along with Oh Sleeper front man Shane Blay is taking things to the next level with their latest release consisting of 11 aggressive tracks which demand listener’s attention.

From the opening lines of “Confession” to the closing notes of “130” the latest offering from Wovenwar is a much more aggressive album than the groups 2014 self titled debut. Vocalist/guitarist Shane Blay seems to have settled in and planted his roots firmly with the former As I Lay Dying members which are nicely showcased on “Honor Is Dead”. The group once again does a great job blending melodic tinged vocals and crushing guitars but goes one step further amping up the heavy portion of the album with strategically placed guttural screams and lyric passages that will surely satisfy even the most fanatical heavy music listener. For those looking the album more melodic moments check out the title track “Honor Is Dead” as well as “Silhouette”. For those wanting the heaviest of the heavy take a listen to “Stones Throw” and “Cascade” as the will undoubtedly do the trick.

The band seems to only be getting better the more and more time they spend with each other and “Honor Is Dead” is a solid testament to that. Though I found the album lacking some of the catchiness found in the group’s previous release I still enjoyed listening to the new material. Clocking in at just over thirty minutes allowed for multiple listens and the diversity of each track cancelled out any redundancies making the latest from Wovenwar a solid pickup.