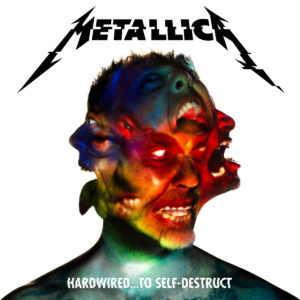 Rock and Roll Hall of famers Metallica are back with a brand new full length album titled “Hardwired…to Self-Destruct”. The album (the bands 10th studio release) is being released via the bands own imprint Blackened Recordings and features 12 brand new tracks from the heavy metal legends which were produced by Greg Fidelman, James Hetfield and Lars Ulrich.

With the “Death Magnetic” era of Metallica long since past fans of the band (myself included) have been clamoring for some new material from the one of the biggest bands to come out of the early eighties thrash music scene. We all have heard the phrase “Be careful of what you wish for” and that couldn’t be more than true with “Hardwired…to Self-Destruct”. The albums 12 tracks capture the band firing on all cylinders and sounding stronger than ever. Tracks like “Moth Into Flame”, “Halo On Fire” and “ManUNkind” all feature the groups blend of ballad like lyricism mixed with the crushing guitars and drums we have all come to love while tracks like “Atlas, Rise!”, “Confusion” and the Lemmy tribute track “Murder One” go straight for the jugular as each track blazes through your speakers with reckless abandonment and aggression. Hetfield and company appear to be at the top of their games both lyrically and instrumentally making this one of the bands most powerful releases in the past twenty years.

Coming off an eight year lapse between records Metallica surely could have gone a number of different ways with their latest offering however, “Hardwired…to Self-Destruct” is a solid mixture of the bands signature classic sound with just enough newness to make you take notice while not completely alienating the listener. “Hardwired…to Self-Destruct” is a near perfect blending of all things Metallica as it flawlessly mixes both old and new while providing listeners with what could possibly be one of thee best releases of 2016.