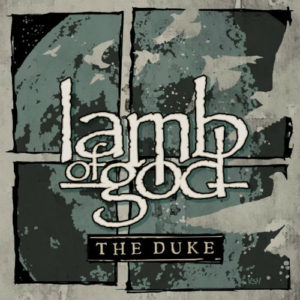 Over the past few years Lamb of God has become one of my favorite bands both from a recording stand point and as a live band. “The Duke” EP is a solid blending of both of those attributes as rarely do you find a band that is solid in both. Both “Culling” and “The Duke” showcase the bands writing and musicianship. Randy Blythe again gets to stretch his legs vocally similar to his performance on the “Strum Und Drang” track “Overlord” as the EP’s title track flip flops between catchy sing a long verses and choruses to ear shredding break downs and backing vocals. The second new track “Culling” takes off like a rocket with drummer Chris Adler’s machine gun like double bass drums laying a solid foundation for the rest of the band to build up. The remaining three tracks are live cuts taken from the bands Rock AM Ring and Bonnaroo performances. Though I found the mixing of the tracks to be a little on the thin side each song was a still a fun listen and is worth checking out especially if you were fortunate enough to attend one of the shows where these were recorded.

Fan’s of the band already know that “The Duke” EP is a must have however what I think really stands out is that the EP is accessible enough to where new comers and more casual listeners can easily get into as well. The two new tracks and three live tracks makes for a fun familiar listen while adding just enough newness to warrant cracking open your wallet or dipping into your ITunes balance.