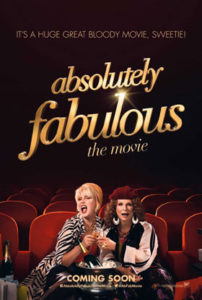 Over two decades and 47 episodes, fans of “Absolutely Fabulous” characters Edina (Saunders) and Patsy (Lumley) lived their lives vicariously through the two ladies grand adventures. Adventures that translated well in half-hour doses. How they fare in a feature length film is quite another story.

When we meet our heroines, Edina has realized that she needs some new clients in her public relations firm, the most “relevant” client currently being 60’s singer Lulu. When she and her friend Patsy discover that famous model Kate Moss is looking for new representation they conspire to crash a party and make a pitch. However a slight mishap leads to Edina being accused of killing the fashion legend. The two go into hiding as the world mourns.

Let me say, as a fan of the “Ab Fab” television show, that I was thrilled to hear a film was on its way. The series was always one of the best written shows on television (co-star Saunders wrote most of the scripts, as she does here on the film). That being said, like the best laid plans of a “Saturday Night Live” inspired film, the bits only work in small doses. Exposing the girls to 90 minutes of screen time leads to a lot of hit-and-miss jokes and outrageous situations.

That being said, it is good to see the girls back together again. And this time they’ve brought along an amazing amount of cameo appearances, featuring everyone from Jon Hamm (as one of Patsy’s many ex-lovers) to fashion designer Stella McCartney, who gets off a great joke surrounding the break-up of the Beatles. Add in the aforementioned Lulu, Baby Spice, Joan Collins and Barry Humphries and if you don’t laugh out loud you will at least smile.

Fans of the series may enjoy the film more than those unfamiliar with it. For those not in the know, may I suggest a trip to the video store to watch a couple season’s worth of “Ab Fab” so you can see what all of the commotion was about.