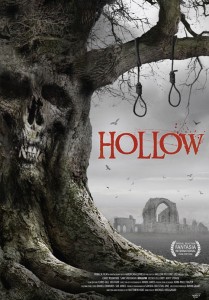 Unlike many, I am a big fan of the horror found-footage genre. “Hollow” has a cool story but really drags it feet getting started. The film spends the first hour getting warmed up and never really gets off and running. “Hollow” claims to be horror film but the only thing horroric is having to sit through this waiting for something to happen. If you are got time to burn and nothing better to do, this film is here but don’t expect since this film is quite hollow (Oh burn!).

Synopsis: An old monastery in a small, remote village in Suffolk, England has been haunted by a local legend for centuries. Left in ruin and shrouded by the mystery of a dark spirit that wills young couples to suicide, the place has been avoided for years, marked only by a twisted, ancient tree with an ominous hollow said to be the home of great evil. When four friends on holiday explore the local folklore, they realize that belief in a myth can quickly materialize into reality, bringing horror to life for the town.

Since the film is shot using handhelds there really isn’t much production value here at all. A film about a evil spirits around a haunted tree, I was hoping for something really cool here but alas let waiting. The acting is not bad but you can tell that they are all newcomers. I watch a lot of horror and I actually went to turn this off a few times throughout its short 90 or so minutes. If you are looking for a film with great scares be sure to check our “Grave Encounters 2”, also from Tribeca Film.

One Reply to “Film Review “Hollow””