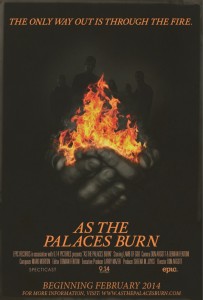 What starts out as a typical band related documentary quickly becomes much more than that. “As the Palaces Burn” is the latest film from heavy metal band Lamb of God. Directed by Don Argott and being released via Epic Records and 9.14 Pictures the film is a 90 minute rollercoaster ride of emotion that captivates the viewer.

Whether you are a fan of Lamb of God’s music or not I strongly urge you to see this film. This is not just another behind the scenes type film designed to give fans an inside look at their favorite band. This may have been the original intent however mid way through the film it starts to document the series of events which lead to the incarceration of lead singer D. Randall Blythes incarceration in the Czech Republic for the charge of Manslaughter.

As the film delves deeper into these events the film takes is most dramatic turn as it shows the immense amount of emotion the band members have for one another as well as Randy’s own strength throughout the entire time of his incarceration and subsequent return to the Czech Republic to stand trial for these clearly bogus charges. Director Don Argott did a great job capturing everything I enjoy seeing in a film of this nature. Candid interviews with not only the band but with fans and fellow musicians gave the film a number of different perspectives that helped affirm the bands place in the music world and the impact the events involving Randy had on those both close to him and those from afar.

Don’t expect anything to be sugar coated or fluffy with this film. Those two words could probably never be used to describe the band Lamb of God before now or after. To the point editing and straight forward accounts from those who lived it give “As the Palaces Burn” the realest feel I have gotten from a documentary to date.