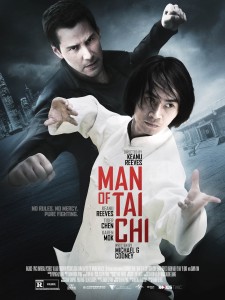 If you have ever seen the Celebrity Jeopardy skits on “Saturday Night Live”, then you will be laughing along with me with Keanu Reeves saying “I know Kung Fu!” Classic! Keanu Reeves though deserves more respect than he gets. This guy really takes his craft seriously and put a lot of time and effort into this film, which also marks his directorial debut. I had a blast watching this. It was fast paced and very well done with impressive martial arts. I also enjoyed that Keanu was in the film but it wasn’t his show only. Tiger Chen is a great lead and carries the film well.

Set in modern Beijing, the film follows the spiritual journey of a young martial artist Tiger Chen, who is the sole student of his elderly master’s Ling Kong Tai Chi style. When Donaka Mark (Keanu Reeves) finds out about Tiger’s style in fighting he recruits him to compete in a highly lucrative underworld fight club. While trying to prove the martial effectiveness of the style in Donaka’s fighting ring, he is put up against some very brutal opponents with no rules combat. As the fights intensifies, so does his will to survive.

I have to say that “Man of Tai Chi” is a ballsy first go at directing for Reeves. It has been in the works for a while with pre-production starting back in 2008. The film is also not an easy sell to mainstream audiences since it was filmed multilingual with English, Mandarin and Cantonese languages. Currently the film is available to watch on VOD and will be released in theaters on November 1st. I have a feeling that this film will not be getting a huge release but it has been getting some great reviews and hopefully word of mouth will spread to get this film the audience that it deserves.

If you like martial arts films, I would definitely recommend checking this out. It is set in modern day yet has this very classic martial arts feel and high respect for the art of Tai Chi. I hope that Keanu has more plans for directing in the future, since this guy really has a knack for this. Aside from this, you are also going to want to check out his next film “47 Ronin”, being released Christmas Day, which is an fantasy action film depicting a fictional account of the forty-seven ronin and set in 18th-century Japan. I will be first in line!

One Reply to “Film Review “Man of Tai Chi””