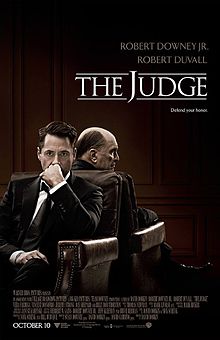 “The Godfather: Part II,” “Network,” “The Natural,” “Falling Down.” What do these films have in common? They all feature performances by Robert Duvall that amazingly were NOT nominated for an Academy Award. I decided some time ago that, in my opinion, Robert Duvall is the greatest film actor of all time. Don’t believe me? Watch “The Great Santini.” Or “The Apostle,” which Duvall also wrote and directed. Then tell me I’m wrong. Those two films earned him two of his six Oscar nominations and he won the Best Actor Oscar for 1983’s “Tender Mercies.” He should earn his seventh nod shortly thanks to his performance in “The Judge.”

Hank Palmer (Downey, Jr) is the stereotypical “fat cat” lawyer. Big house in the suburbs. Drives a Ferrari. And has no problem defending clients who…well, let’s just say that not always guilt free. When an opposing attorney asks him why he never defends an innocent client, Hank replies that “an innocent man can’t afford me.” When his mother passes away, Hank leaves his high-style Chicago lifestyle for a trip back home to small town Indiana. Back to his family. Back to the Judge.

Flawlessly directed and skillfully acted, “The Judge” joins last week’s “Gone Girl” on this year’s short list of worthy Oscar contenders. With no love lost between them, Judge Joseph Palmer (Duvall) and his middle son are like oil and water. When Judge Palmer is involved in a hit and run accident – it doesn’t help that the man killed had once appeared before the judge and held a grudge – Hank must go to the mat to keep his father out of prison. Whether he’s innocent or not!

Duvall and Downey, Jr. are outstanding. Both men would certainly be recognized come Oscar time if I was in charge. Constantly finding just the right thing to say to twist the imaginary knife just a little more, the two bicker more than an old married couple. But, like that couple, there is also a mutual respect and love that they keep hidden in their emotions. As oldest son, Glen, Vincent D’Onofrio tries to be strong, though he still nurses a distrust of Hank and his efforts. Jeremy Strong plays youngest brother Dale, a young man who never goes anywhere without his Super 8 camera, with a gentle sweetness. Vera Farmiga is strong as a woman from Hank’s past while Billy Bob Thornton oozes with oil as the special prosecutor sent to bring Judge Palmer to trial. There isn’t a false note in the bunch. What is most surprising is the way the film is crafted by director Dobkin. A veteran of such comedies as “Shanghai Knights,” “Wedding Crashers” and “Fred Claus,” this is not a film I would expect from him. Though a tad too long, Dobkin manages to keep the film moving, only revealing something new when the time is right. The pace never drags and Dobkin has delivered a first rate dramatic debut!

One Reply to “Film Review “The Judge””