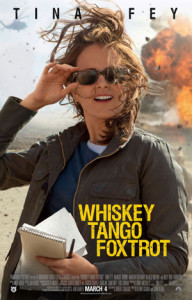 It’s 2006 and we meet hard-driving Kim Baker (Fey) in the middle of an assignment as a news reporter imbedded in Afghanistan with a Marine regiment. Things are typically hectic, though Baker’s story isn’t.

Flashback to 2003 where we discover Kim Baker in a dead-end job as a news writer for television. As the war in Iraq has intensified, the station is looking for ANYONE that will volunteer to cover the “forgotten war” in Afghanistan. The only requirements are that you can’t be married or have kids. Taking this as a sign, Kim volunteers and soon finds herself in Kabul, where her bright orange backpack helps her stick out like a sore toe. She make the acquaintance of a fellow female journalist, the beautiful Tanya Vanderpole (Robbie). Tanya tries to cheer Kim up by pointing out that she is “Kabul cute,” meaning where she might be judged as a 6 back in the states she is a solid 8.5 or even a 9 overseas. Good news indeed.

Well-made and much more serious than it’s being marketed, “Whiskey Tango Foxtrot” gives Tina Fey to flex some acting chops you may not know she possessed. She does have a few good one-liners, but the story keeps her character grounded in the middle of war and the carnage it continually provides. In between assignments Kim stays at a boarding house where unwinding after being involved in a firefight begins with alcohol and ends…well, sometimes it never ends. The film gives an inside look at the various cultural differences that many here in the states may only have heard hints of. Even the local women scold Kim harshly for the slightest offense. However, this new influx of excitement in her life keep her going.

The film is well cast, with each actor playing well off of the others. As a Scottish journalist interested in Kim, Freeman is well meaning and sympathetic. As the Marine general whose unit Kim follows, Billy Bob Thornton is strong and unflinching. And very thin. Someone buy this man a sandwich. Alfred Molina gets the majority of the humorous lines as an Afghani politician slowly working his way up the power ladder. The battle scenes are well staged and, again, the horrors of war may not be what audiences are expecting so be warned. War is still hell.