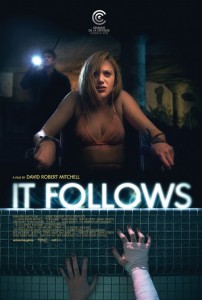 It delivers. From the opening sequence, to the final scene, this movie is a great watch. With a simplistic story, great score, believable performances and unobtrusive direction, It Follows absolutely shows the audience that tone and characters are what make a horror film. Not gore, flashy camera movies, and quick-cut editing.

Maika Monroe (The Guest) plays Jay Height, whom after a date with a new guy, is made aware that through their coital act he has passed on… something. And whatever it is will come for her until it kills her, or she passes it on to someone else. Think of it has a sexual chain-letter. It’s as simple as that. There is really no story beyond that premise. And nothing more is needed.

Utilizing the anamorphic widescreen frame, this film takes its time. Its set-ups are simple, its composition is nothing extraordinary; but it’s perfect. Each scene gives the actors time to perform, and nothing seems too forced. We aren’t subjected to meaningless subplots, or random scenes to show more gore or killings. Everything that happens is for a reason.

It Follows takes place in an unknown time period. With hints of present-day technology mixed in with console TVs with antennas, home phones with cords, and stacks of VHS cassettes; as well as old-school monster movies on the TV; it seems as if the director wants to keep you unaware as to when this story occurs. For this could happen anytime and anyplace. Brilliant may be a bit much, but I love that there are no cellular phones, text messages, computers, or references to on-line social networking sites. Leaving out those elements will help to ensure that this movie has a long life and won’t be dated.

While watching this film I kept thinking that It Follows could easily be viewed as this generation’s Halloween. It Follows is actually this generation’s It Follows. This movie stands on its own and feels completely original. Even with the horror film tropes – conversations about sex, absentee parents – It Follows takes you to fresh ground.

It’s creepy, it’s funny, and it’ll make you talk. Part of what I liked about this film is all that they left out. They pose questions that you can tell they never intended to answer; because leaving things unknown is very unsettling. One could easily get lost in trying to find a rational reason as to why it all happened; and even make you question some events that occur, but it doesn’t matter. It’s just a great movie.

The only negative I have about this film is the quality of the special effects. It’s a low-budget indie film, and I fully understand their restrictions. I will grant that they did well with what they had available; but they do stick out.

It Follows is absolutely worth seeing in theatre. Seeing it on a big screen with a full audience will only add to the experience.

One Reply to “Film Review “It Follows””