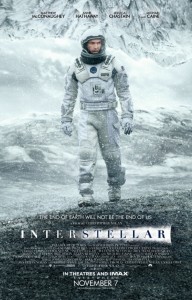 “2001: A Space Odyssey.” “Close Encounters of the Third Kind.” “The Right Stuff.” “The Abyss.” All of these films introduced to their respective audiences a view of our lives on Earth and the possibility of life elsewhere. Christopher Nolan has taken the best parts of these films and turned them into a breathtaking, visual masterpiece called “Interstellar.”

Earth as we know it has changed. Our food supply is slowly dwindling. While farmers like Coop (McConaughey) are still doing well with corn, word has come down that the last Okra crop has been destroyed. A blight has taken over the land and Coop does his best to ensure his family – son Tom (Timothee Chalamet), daughter Murph (Mackenzie Foy) and father-in-law Donald (John Lithgow) – survive. Coop wasn’t always a farmer, but he has adapted. Back in the day he was a test pilot but a tragic crash put him on a tractor. Some nights he awakens with a shout thinking about his accident.

Coop has great dreams for his children, though he wonders how they will ever achieve them. Tom’s aptitude test shows him best fit to be a farmer, though Coop disagrees with this. Coop is also in hot water with Murph’s teachers. Apparently he has let her read an old text book documenting the moon landing. However, because of the dire situation in the world, new text books state that the moon landing was a hoax, perpetrated by Russia and eventually bankrupting that country. Yikes! When a bizarre set of circumstances lead Coop to a hidden NASA compound, he is urged to join them on a journey that, if successful, will save the world.

It is really hard to go into the details of this film without giving too much away. Same with the cast. I can tell you that, besides the three Oscar-winners named above, no less than two others appear in the film. All give great performances, with McConaughey adding his name to my short list of Best Actor nominees for next year. Technically, the film is everything you’d expect from Christopher Nolan, the master filmmaker behind “The Prestige,” “Inception” and the “Dark Knight” trilogy. And more. Though a tad long, the film flows pretty smoothly. The script, by director Nolan and his brother, Jonathan, is tight and concise. The dialogue rings true and the emotions conveyed by the cast is genuine. The mood of the film is helped along by Hans Zimmer’s score, which the composer wrote not after reading the script or viewing the film but only from a one page note Nolan handed him during filming. The visual effects are mind boggling, especially when Nolan revealed that the film has very little CGI effects in it. A remarkable achievement in filmmaking that will have you on the edge of your seat.

One Reply to “Film Review “Interstellar””