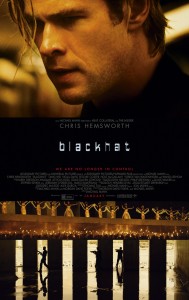 May I state the obvious? I shall. It seems like every week, and sometimes every day, there’s a breaking update on how someone’s social media account was hacked or how hacktivists have leaked thousands of valuable government or company documents (U.S. military and Sony, I’m looking at you). Cyber terrorism might end up being the most highly used news term for 2015 with how the landscapes of battles are changing. It’s a fascinating new realm in which to play with story ideas and birth high concepts. So why does “Blackhat” feel like such an outdated product?

Scrawny, pencil thin nerds are what we’ve come to expect in techno thrillers. We imagine them sitting behind a computer, clicking and clacking away at the keyboard, pushing their glasses up the brim of their nose, but instead we have the muscular, wavy golden haired Chris Hemsworth. He plays Nicholas Hathaway, one of the world’s greatest hackers, who’s incarcerated and still able to hack from prison by the way. He does push-ups in solitary, talks with piercing confidence, and seems un-phased by life in prison.

His skills will be needed after a criminal begins hacking his way into the financial systems of China and causes a nuclear power plant to go haywire. He’s recruited by Chen (Leehom Wang), a high ranking military expert for the Chinese government who, by the strangest coincidences of the movie, was Nick’s college roommate. They may have just as well have lived across the hall from our criminal by that logic.

After some unnecessary negotiations with Chinese and U.S. governments to get Nick free, the two meet, and along for the ride, is Chen’s sister, Lien (Tang). Oh by the way, she’s also a master hacker, computer expert, and anything else the script requires. The exact moment Nick and Lien lay eyes on each other, you know they’re going to hook up. It’s usually an obligatory character relationship that’s created to add tension or complicate matters for our group. It doesn’t.

The more I think about “Blackhat”, the more I wonder when this was written and who wrote it. Nick’s on the trail of a supposed genius that neither the U.S. or Chinese government can catch, but his knack for picking up on clues or finding evidence is ludicrously easy or frustratingly unrealistic. It makes you wonder why neither government wouldn’t already have the manpower or staff to catch someone who, as the movie says, is incredibly dangerous. Although it’s example as to why he’s so dangerous is because he’s not doing these attacks for political or financial gain. By the way, one of those ends up being true anyway.

It’s really hard to flat out hate something that tries so admirably. It’s almost like listening to a kindergarten class sing a beloved song. They’re butchering it, but they definitely got some room to grow. Director Michael Mann’s previous movies include “Last of the Mohicans” and “Heat”, but loses so much dramatic flair amidst techno babble. The cast is spick and span despite a baffling script. There are some neat visuals and gorgeous establishing shots. But this movie is just frustrating because it just can’t bring everything together.

Someone might want to consider programming some better hardware into this movie before releasing it. There’s a lot to enjoy, but it’s suppressed by mundane talk sets. It’s even more vexing for me because I keep trying to put my finger on it. What happened? It has a style that screams exciting, but constantly had me stretching my legs and covering my mouth as I yawned.