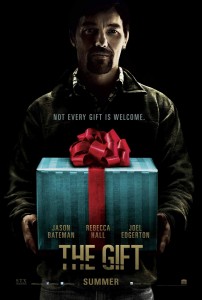 It’s funny how things happen. About a month ago, a long-time friend of mine dropped me a note on Facebook. In it, she recounted a run-in I had in high school with a young man who would later become her now ex-husband. She told me that the person in question still talked about our encounter and asked if I might feel up to apologizing for bullying him. I considered her request and then sent her my reply. No. I also explained the situation (sometimes it helps to have both sides of the story). I told her I didn’t think what I had done was bullying. It was the first, and last, time I ever met the guy. It’s not like we had a history. Which brings us to “The Gift.”

Simon (Bateman, in 100% prick mode) and Robyn (Hall) have arrived in California, where Simon has gotten a high profile job that may even get better. As they unpack in their new home we see that they are like most professional couples. Except there is no need to hang up the various nursery items. Robyn lost the baby and the couple is still recovering. While out shopping Simon runs into an old high school chum named Gordo (Edgerton, unrecognizable). The rehash a few old times and then go their own way with a promise to keep in touch. Gordo is a man of his word.

Full of great scares and even greater performances, “The Gift” is not only a top-notch thriller but it introduces writer/director Edgerton as a filmmaker to be reckoned with. As the plot progresses we continually learn that the characters aren’t who we thought they were. The more time Gordo spends with the couple the more you begin to realize that we are still at a point in our lives where our first impressions aren’t always correct. We also learn that each character has a past, one they’d like to forget completely, no matter the cost.

After rebuilding his career as the lovable schlub, Bateman has added a dimension that continues to surprise. Hall is just as good as a woman who realizes she doesn’t know who her husband is. And the more you sympathize with Edgerton the more you find yourself seconding guessing your decision. I have no idea what his second film will be about but it’s already go my interest piqued!