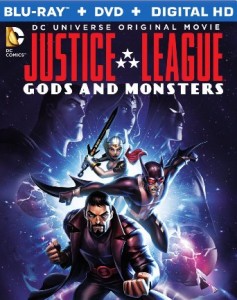 “Justice League: Gods and Monsters” features a super cool alternate universe where Superman is the son of Zod. Batman is actually Man-Bat and Wonder Woman is the, God of War,  Princess Bekka. I really enjoyed this latest original movie in the DC animated universe and have always been a fan of DC Comics’ Elseworlds stories. Plus this film sees the return of animation legend Bruce Timm delivering a super cool new view of Justice League. A must see for an DC Comics fan!

Official Premise: “Justice League: Gods & Monsters” features a Superman born of General Zod’s blood, a Batman with a healthy dose of bat in the man, and a Wonder Woman rising from the ranks of the New Gods. This ain’t your daddy’s Justice League. They are as likely the world’s saviors as Earth’s despotic rulers. When a group of famed scientists experience untimely “accidents,” a government task force follows the trail of clues to the Justice League — and into a high stakes game of intrigue, mystery and action that asks the question: How do you serve justice to those above the law?

Warner Bros is delivering this film as a combo pack with a Blu-ray + DVD + Digital HD UltraViolet. The 1080p transfer is decent and delivers with the CG effects and animation. The DTS-HD Master Audio 5.1 track sounds great and no complaints there. “Alternate Realities: Infinite Possibilities” features various executives talking about the DC Comics’ Elseworlds stories. “Calculated Risk: The Making of Gods and Monsters” is a great behind-the-scenes look.

“The New Gods” talks about the film’s character designs and approach to putting the film together. In “From the DC Comics Vault” there are two animated episodes including “Phantoms” from Legion of Super Heroes and “Brave New Metropolis” from Superman: The Animated Series. Lastly there is a super rad sneak peak at the next DCU animated original movie, “Batman: Bad Blood”, which will introduce Batwoman.