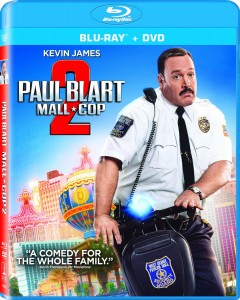 There is no denying that Kevin James is talented. He has his moments where he is quite funny. “Paul Blart: Mall Cop” was a decent film at best but it never warranted a sequel. Even though I love Vegas, this film was a complete waste of time and really unnecessary. Just like “Grown Ups 2,” another film that James was in that wasn’t needed. Still though, if you liked the first film you might, stress might, enjoy this film.

Official Premise: In this sequel, in which Kevin James reprises the role of Paul Blart, the security guard is headed to Las Vegas to attend a Security Guard Expo with his teenage daughter Maya (Raini Rodriguez) before she departs for college. While at the convention, he inadvertently discovers a heist – and it’s up to Blart to apprehend the criminals.

The Blu-ray comes with a combo pack with a Blu-ray + DVD + UltraViolet copy included. The 1080p transfer is sharp, courtesy of Sony who consistently delivers impressive releases. Even though not a film needed to be mastered in 4K, Sony definitely takes pride in their Blu-ray transfers. The DTS-HD Master Audio 5.1 track sounds good and works well even with the cheesy action.

The special features are nothing special but include a gag reel, some deleted scenes, and a few very short features. The first is “Security Force: The Cast of Paul Blart 2” has cast chatting about the sequel. “Back in the Saddle” discusses the use of the Segway back in this film. “How to Make a Movie” is a chat with the director Andy Fickman. “Le Reve” introduces the Vegas location into the mix. “No Animals Were Harmed” looks into the bird fight scene. Lastly there is a photo gallery included and trailers.