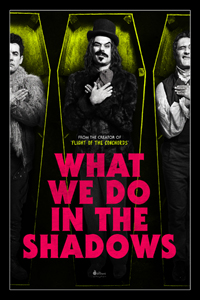 What We Do in the Shadows was released here back in February and still remains my favorite comedy of 2015. From the makers of HBO’s Flight of the Conchords, What We Do in the Shadows is a mockumentary from New Zealand which sees the vampire genre through the eyes of four decidedly uncool flatmates who are also undead. If the thought of yet another vampire film has you reaching for your crucifix, I would implore you to hold off just for these 85 minutes. Despite its slight runtime, Shadows manages to cleverly hit upon all the classic vampire tropes in new and hilarious ways. Rather than Interview with the Vampire, we get interviews with some vampires by way of Christopher Guest or “The Office”.

Taika Waititi is our main vampire, Viago, a friendly fop of only 379 who likes to keep the flat neat even while draining victims of their blood. To start off, he calls a flat meeting where he and ex-torture-master Vladislav (Clement) can confront their youngest roomie Deacon (Brugh, playing 183 years old) about his lax approach to dish duty. Fourth roommate, Petyr, a Nosferatu-like creature who lives in a stone tomb in the basement declines his invite to the meeting. It’s a brilliant intro to the dynamics of this most unusual household before the ‘film crew’ are able to go further into each character’s origins, heartaches and peculiar hobbies. Their routine of hitting up Wellington, NZ nightspots and scouting for potential victims is broken up when one of those potentials is accidentally turned into a new vampire Nick (Gonzalez-Macuer). Nick brings with him a mortal BFF Stu, a deadpan company IT guy, who charms the household into not eating him by simply being cooler and showing the vamps how the internet works. Meanwhile Nick flies around town trying pick up lines like “I’m Twilight” blowing their cover and generally–and fortunately for the viewers – stirring up trouble while blowing their cover.

The film culminates at the Unholy Masquerade where all the communities of supernatural Wellington beings convene. It’s a brilliant finale which allows the filmmakers to expand their lens from vampires to zombies, goblins and werewolves, causing one to wonder what’s going on in all those other shadows over there?? Rhys Darby in particular has a standout bit part as the leader of the werewolves who are just doing their best to keep calm. The comedy works on pretty much every level and was a welcome return to the sensibilities that I loved so much in “Flight of the Conchords”. 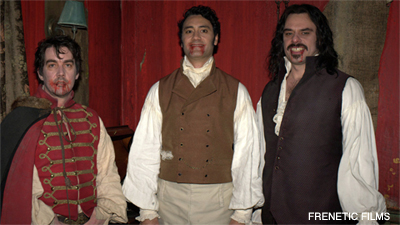 As seems to be the case with mockumentaries, ‘Shadows’ has a wealth of extra footage that was left on the cutting room floor. This blu-ray is bursting with additional characterization of everyone on the screen, that is pretty much as hilarious as what made it to the final cut. Kudos go to the filmmakers for keeping the final film as tight as it is when they had this much content at their hands. Additionally, while the supernatural gags blend seamlessly into the comedy, the film has a whole lot of practical special effects at work–from blood splatters, to men on fire and rotating entire sets– that the behind the scenes footage highlights. Clements and Waititi’s original short version of the film completes the disc, showing the seeds of what eventually made it to feature length.

Filed Under: DVD/Blu-Ray Reviews Tagged With: bluray, jemaine clement, review, taiki waititi, what we do in the shadows