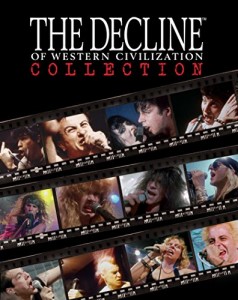 The highly-celebrated and long-awaited trilogy known as “The Decline of Western Civilization” is now for the first time available as a one complete collection. Available on both Blu-Ray and DVD the great people at Shout! Factory has compiled all three films from the series along with a 4th disc containing tons of bonus footage and interviews. And if that wasn’t enough accompanying the 4 disc collection is a 40 page booklet containing rare stills and an essay by rock historian Domenic Prioret.

Having grown up renting these films from the local video store I was instantly drawn back to the films when I heard they would be being released as a complete collection. Each of the films was just as I remembered. From the classic interviews with Black Flag which shows of their meager rehearsal/living quarters to Germs front man Darby Crash making breakfast and X’s mid tattoo trance like ramblings part 1 of the series had me again clamoring for more. Part 2 transports you back to the late 80’s L.A. metal scene, a scene that will go down in infamy as younger bands like Poison and Motley Crue mixed with long time rock staples like Kiss, Alice Cooper and Aerosmith. It’s all here just as I remembered from Ozzy Osbourne spilling his drink to W.A.S.P. guitarist Chris Holmes pouring Vodka on his head while barely floating in a swimming pool. Part 3 of the series was never released for home viewing however knowing the film existed I had seen bits and pieces over the years so to have the film available now was a personal highlight. The third film showcases performances by Final Conflict, Naked Aggression and The Resistance while shining a light on important topics such as youth homelessness, alienation and alcoholism.

Fans of both music and gritty documentaries will certainly want to check out this release. If not for the sheer nostalgia of past musical era’s but also for the importance that these films played to an internet-less generation who without these films maybe not have ever known that there were youth out there with similar trials, tribulations and ideas/goals. Though each of the films feature new 2k high-definition scans of the originals that though look sharp and crisp still retain the appeal of the originals. The only negative I found with the release was that often times the sound was quite unbalanced leaving interviews to be quite low while performances were quite loud. Even though this caused me to put some wear and tear on my remote/TV I enjoyed every minute of the 4 discs.