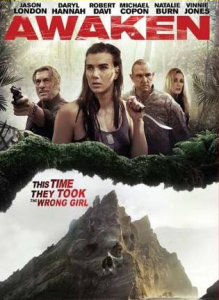 Just looking at the cover of “Awaken” induces nostalgia. Names like Vinnie Jones, Edward Furlong, and Jason London conjure memories of many cheesy action movies, some of them classics. So is “Awaken” the who’s who of action movies? No. It’s more like “Repo Men”, “Cube”, and “Surviving the Game”, got together for a story idea, got drunk, and went off the notes they scribbled down in a drunken stupor. While the creators may not have been in the most sober state of mind while writing this story, a couple of beers could help you enjoy this movie more if you plan on checking it out.

Imagine waking up in the thick jungle woods of an island. Your immediate instinct is to figure out where you are, but a mysterious group of paramilitary men are hunting you down. Before you can even wake from the daze or having the surrounding features set-in, burly killing machines are giving chase to you. That’s the nightmare that Billie (Natalie Burn) finds herself in. She comes across a group of survivors, who’ve been on the island for a while, but they offer no help to her predicament, in terms of an escape route or what is they’re actually doing there.

In some movies, like “Predators”, this notion is exciting because we as an audience have some kind of inkling about what’s going on, but “Awaken” certainly takes its sweet time to reveal the seedy reasons they’re on this island. But when a movie takes its sweet time, it can be engaging if the mystery is intriguing enough. Maybe the mystery in “Awaken” would have been more mesmerizing if I didn’t read the synopsis which made the “twist” a dead giveaway. There’s a lot that “Awaken” does wrong, that’s very obvious from the first half of the movie, but this disjointed hodgepodge has a campy charm.

It’s not necessarily good acting, but when you have Robert Davi arrive and sell every moment he’s on screen, it’s entertaining. A veteran actor can make do with what they have and many in this movie know how to sell the cheese. Daryl Hannah, who shows up later in the movie, may have needed a reality check about what kind of movie she was filming; although it should have been obvious to her in one scene where she’s awaiting the results of surgery by playing with a monkey doll surrounded by stock bad guy goons. Outside of that miscast, everyone is well aware how to react.

I’ve certainly watched better action movies, but I’ve certainly been subjugated to dull ones. “Awaken” smartly casts Natalie Burn as the leading lady. Not a well-known name and certainly not a name I know off the top of my head. But the ballet performing actress certainly has a knack for action. “Awaken” ultimately falls into the category of enjoyable, but forgettable. It would have done well in the 80’s where cheeseball action movies with outlandish concepts thrived.