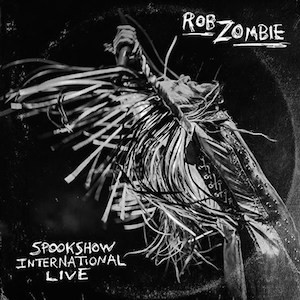 “Spook Show International Live” is the latest release from Rob Zombie and his make-up clad crew of homicidal maniacs. The first live release from Zombie in 8 years consists of 19 pounding tracks that contain enough power to wake the dead. Recorded during the “Venomous Rat Regeneration Vendor” tour Rob and his band deliver their signature show right to your living room.

This is the way Rob Zombie should be heard! Yes all the studio versions of the songs contained on “Spook Show International Live” good in their own right but this is how they should really be heard. Each of the 19 tracks are vibrant and clear allowing the listener to experience the power of the band as if they are standing in the front row of a live show. Signature RZ tracks like “Living Dead Girl” and “Never Gonna Stop” blend in perfectly with newer tracks such as “Sick Bubblegum” and “Dead City Radio” while White Zombie classics such as “Thunderkiss ‘65” and “More Human Than Human” round out an already impressive set list along with some other really special numbers. Even the background vocals can be heard clearly through the heavy distortion and bombastic drums and bass adding to the albums appeal.

Whether you have seen Rob Zombie multiple times or never had the chance you need to get this album. Very rarely can the true essence of a live performance be captured and then transferred for personal listening however “Spook Show International Live” goes the extra mile and then some giving listeners something they can listen to time and time a again.