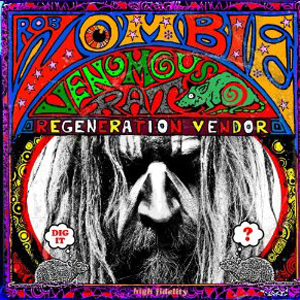 Rob Zombie is back with a brand new solo album titled “Venomous Rat Regeneration Vendor”. This is the veteran shock rockers 5th solo album and the follow up to his 2010 album “Hellbilly Deluxe 2”. The album features 11 original tracks and 1 off the wall cover produced by Zombie himself that contain his signature over the top horror fueled sound.

Though the title “Venomous Rat Regeneration Vendor” is quite a mouth full the album continues the long tradition of Zombie albums that date back to the late 80’s.  Sonically “Venomous Rat Regeneration Vendor” is pushed to the very edge of sanity and at times boils over in to insanity. Every conceivable sound layer seems to be utilized providing a different listening experience almost every time you here it. Songs such as “Lucifer Rising” feature driving guitars and thunderous drums while tracks like “Teenage Nosferatu Pussy” feature haunting vocals and lingering samples that permeate in the airiness of the track. The album also features an interesting rendition of the Grand Funk Rail Road classic “We’re an American Band” which I found to be quite entertaining.

Though “Venomous Rat Regeneration Vendor” may not measure up to some of Zombie’s previous work, it is still a pretty impressive piece seeing that both Zombie and guitarist John 5 were splitting time between working on this album and Zombies next film “The Lords of Salem”. A must have for hardcore fans however if you are looking to get in Zombie’s music this is not the album to start with. Fans wanting to pick up a copy of “Venomous Rat Regeneration Vendor” will be able to do so starting on April 23rd.