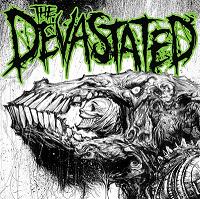 “Devil’s Messenger” is the first release from Southern California’s The Devastated a band whose line up consists of former Impending Doom and Oblige members. Their album is being released via Century Media Records and features 12 original tracks produced by Chris Eck. Fans of these members’ previous groups will surely want to check out this album.

Each of the 12 tracks contained on “Devil’s Messenger” is a gritty, down tuned master piece each containing enough power to raise the dead. The song “Swallowing Tumors” is what I would assume pure evil would sound like while tracks like “The Devils Messenger” and “Zombies” will feed the needs of those in love with the standard breakdowns often associated with grind core music.

Chris Eck did a good job of capturing the sheer intensity of the music while creating a very listenable album. If you are looking to expand you grind core collection go out and get the debut album from The Devastated.