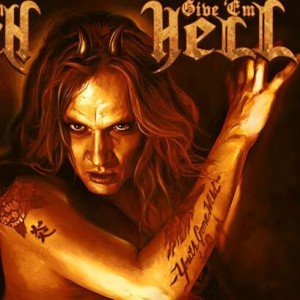 Former Skidrow front man Sebastian Bach is back with a brand new solo album titled “Give ‘Em Hell”. This is Bach’s 5th release as a solo artist and is the follow up to his 2011 release “Kicking and Screaming”. The album is being released via Frontier records and was produced by Bob Marlette (Alice Cooper, Rob Zombie). “Give ‘Em Hell” features 12 brand new tracks along with special guest appearances by John 5, Steve Stevens and Duff McKagan.

Though the album showcases Sebastian’s expansive and impressive vocal range “Give ‘Em Hell” was a bit much. Mid-way through my listen and it was very clear that I had already had enough of Bach’s falsetto like screams. Don’t get me wrong I love Sebastian’s voice but tracks like “Push Away” and “Taking Back Tomorrow” prove you certainly can have too much of a good thing. Bach’s backing band consisting of Devin Bronson on guitar, Bobby Jarzombek on drums and former Guns ‘n Roses/Velvet Revolver bassist Duff McKagan lay down some extremely heavy and intricate passages that I found to be more interesting than the lyrical portions of the songs. Tracks such as “Dominator” and “Gun to a Knife Fight” are perfect examples of the bands capabilities and tightness as a unit.

“Give ‘Em Hell” is a fairly straight forward rock record that blends Bach’s soaring vocals with overdriven guitars and thunderous bass and drums. Though I found the album sounding a bit dated in several spots I feel producer Bob Marlette did a good job capturing the essence of each song. Long time Bas fans will certainly want this for their collections however newer listeners maybe a bit put off by some of the tracks.