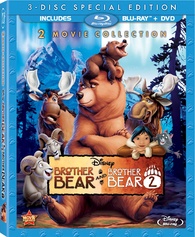 When I first saw “Brother Bear” in the theaters, I first thought that Disney was slipping quite a bit with their animated films but since it has grown on it. “Brother Bear” is not a perfect film and in fact is one of the last classically animated film from Disney. The film delivered a great message and has quite a bit of heart. The animation still holds up, especially on Blu-ray. The voice cast includes an interesting choice of Joaquin Phoenix and Rick Mornais, in one of his last film roles. So since this film is a two movie collection, we also have the direct-to-video sequel “Brother Bear 2” included. This film screams direct-to-video and really should be considered as a bonus feature here for this release. “Brother Bear” is a the real draw here though and worth the purchase or upgrade alone.

Official Premise: Disney proudly presents two heartwarming and hilarious movies in one incredible collection – Brother Bear, the 2003 Academy Award nominee for best animated feature, and Brother Bear 2 – together for the first time on Blu-ray. Bring home an entire forest full of fun, complete with digitally restored high definition picture and sound. After an impulsive boy named Kenai is magically transformed into a bear, he and his little brother bear, Koda, take a courageous (and often hilarious) journey to see the Northern Lights. Experience the excitement of these two fantastic films like never before on Disney Blu-ray!

Even though these films aren’t Disney classics per se, they are still decent film and look amazing on Blu-ray. “Brother Bear” looks stunning with its 1080p transfer presented with its aspect ratio of 2.35:1 with black bars at the top and bottom. The colors are beautiful, sharp and really pop off the screen. Believe it or not “Brother Bear 2” is also very impressive as well. Even though it is direct-to-video quality Disney cleaned this film up for this Blu-ray quite well. Next up is the audio, “Brother Bear” delivers a great DTS-HD Master Audio 5.1 track, which works well with the action, the dialogue, the score and of course Phil Collins’ songs. Again “Brother Bear 2” also delivers with it’s DTS-HD Master Audio 5.1 track. For what it is worth, the track works with what what the film has going for it.

Next up are the special features, which are just ports of previous DVD releases. They are decent but in terms of taking the extra effort, it is a letdown. “Brother Bear” starts off with an audio commentary track with the film’s characters Rutt and Tuke (voiced by Rick Moranis and Dave Thomas), the film’s Canadian Moose duo. If you are a die-hard fan, I highly recommend this as it is a riot. “Paths of Discovery: The Making of Brother Bear” is a four-part documentary focusing on the cast, story, production and score. There are three deleted scenes with an introduction from directors Aaron Blaise and Robert Walker, as well an Never-Before-Heard Song (except on the last DVD release) called “Fishing Song”. “Art Review” takes us with Art director Robh Ruppel and supervising animator Byron Howard as they discuss…art from the film.

“Bear Legends” is a very short series of Native American tales. There is the song “Transformation” with its original Phil Collins lyrics, as well as a Sing-Along Song for “On My Way” and a Music Video for “Look Through My Eyes” by Phil Collins. “Koda’s Outtakes” are in character and are quite funny, taking a page from “Toy Story”. “Making Noise: The Art of Foley” is a non-technical look at sound design for kids. Wondering about “Brother Bear 2” extras? The only extra is “Behind the Music” with Producers Jim Ballantine and Susan Kirch, director Ben Gluck and others talking about the films tunes.

“Brother Bear” is not the only animation classic being released on high-def Blu-ray. March 12th will also bring the release of “The Hunchback of Notre Dame 1 & 2″, “Mulan 1 & 2″ and “Who Framed Roger Rabbit”, which is celebrating its 25th anniversary. Of course like Disney is smart to release their films like that ”Mulan”, ”Brother Bear” and “Hunchback” with their direct-to-video sequels because otherwise I do not think that anyone would be interested in owning them. So I look at these direct-to-video sequels as a bonus feature really. I am not sure how “Who Framed Roger Rabbit” fits into this trend but that is one release that I am highly anticipating.