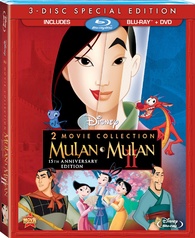 “Mulan” was at the tail end of Disney’s hand-drawn animation success.  I have always been a fan of “Mulan” and I always thought it was underrated.  The music and songs are memorable and it has fun characters like Mushu (thanks to Eddie Murphy).  The film also creates another classic Disney princess, who is not only pretty but also very strong.  I think having a daughter of my own that resonates a little more with me. “Mulan II” on the other hand is quite a different story. It comes from a time that Disney was making sequels left and right to their products just for the sake of the buck.  To be honest though, it is not as bad as I remember.  Maybe that is due to its impressive Blu-ray transfer (more on that below).  So obviously the main draw here is to own “Mulan” for the first time on high-def Blu-ray.  The film is also celebrating its 15th anniversary, which is cause for celebration.

Official Premise: Celebrate the 15th anniversary of Disney’s critically-acclaimed masterpiece Mulan with this sensational 2-movie collection – presented for the first time in Blu-ray high definition. Mulan’s triumphant tale of honor, courage, and family pride shines brighter than ever with new digitally mastered picture and sound! Disney’s original animated classic magically transforms an ancient Chinese legend into a spectacular motion picture event. Relive all the wonder and excitement as Mulan breaks tradition by joining the Imperial army accompanied by her hilarious guardian dragon, Mushu. The adventure continues in Mulan II, as newly engaged Mulan and Shang journey to a distant city in a valiant quest to save their beloved empire. Your whole family will adore these two extraordinary films on Disney Blu-ray.

Alright now more on the audio/video presentation.  Disney is known for going out of their way to deliver very impressive high-def transfers of their classic animated films.  “Mulan” ranks up their with the best of them. The 1080p is extremely sharp and really showcases the beautiful animation and colors used throughout this film. There is something about hand-drawn animation that just really looks amazing on Blu-ray.  Even though, I love me some Pixar films, I really have a special place in my heart for the slight imperfections in the lines and it just reminds you that everything does not need to be perfect.  “Mulan II” also (believe it or not) looks quite amazing with its 1080p transfer.  Of course, it is not as good as “Mulan” since it carriers that direct-to-video look, but the colors look good and sharp even though. Like the 1080p video, “Mulan” also packs a fantastic DTS-HD Master Audio 5.1 surround track.  It works very well with the music and action. “Mulan II” also sounds great but again a notch below the first.  The songs (even though not great) sound decent and the dialogue is clear. Also I should mention that both films are located on one Blu-ray disc and the additional two DVDs include each film on their own disc.

The special features are probably my least favorite aspect of this whole release.  “Mulan” packs nothing new at all for it’s 15th anniversary and just rehashes its DVD features, all presented in SD.  There is an audio commentary track with Producer Pam Coats and directors Tony Bancroft and Barry Cook, decent and very informative.There are seven deleted scenes (like usual) in storyboards mode with introductions by director Tony Bancroft. “Classic Backstage Disney” runs about an hour with numerous behind-the-scenes featurettes including “Mulan’s Fun Facts,” “The Journey Begins,” “Story Artists’ Journey,” “Design,” and  “Production”.  Lastly “Classic Music & More” includes more featurettes including “Songs of Mulan,” “Mulan’s International Journey and five music videos. “Mulan II” fares even worse with only three short extras.  “Voices of Mulan” looks into the return of several original cast members, as well as the new voices.  There are three deleted scenes, surprisingly in HD. Lastly there is a music video for “I Wanna Be Like Other Girls” by Atomic Kitten.

“Mulan” is not the only animation classic being released on high-def Blu-ray.  March 12th will also bring the release of “Brother Bear 1 & 2”, “The Hunchback of Notre Dame 1 & 2” and “Who Framed Roger Rabbit”, which is celebrating its 25th anniversary.  Of course like Disney is smart to release their films like that “Mulan”,  “Brother Bear” and “Hunchback” with their direct-to-video sequels because otherwise I do not think that anyone would be interested in owning them.  So I look at these direct-to-video sequels as a bonus feature really.  I am not sure how “Who Framed Roger Rabbit” fits into this trend but that is one release that I am highly anticipating.