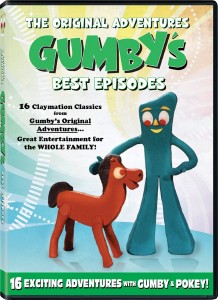 As I am a child of the 80’s, I came to love “Gumby” during his revival in the late 1980’s. I remember it also being my first reveal with claymation or stop-motion animation besides the Rankin/Bass holiday specials. I don’t know what it is but I have always had a special place for this green clay hero and his little dog Pokie. There are way over 200 episodes spanning from this series dating back to the mid-1950’s. So since I doubt we will ever get a complete series release, the closest we ever came was with Rhino’s 7-DVD boxed set with over 100 episodes from 2002, I am excited to see that Legend Films is giving this series some love. I hope that this release is the first of many volumes of this series.

Official Premise: Legend Films is proud to offer this collection of the best episodes from Gumbys Original Adventures series. See Gumby and Pokey as they find adventure and learn valuable lessons along the way. Watch Gumby as he attempts to sneak away for fun with Pokey by setting robots to do his chores in Yard Work Made Easy, see a wonderful masterpiece of music and animation in Gumbys Concerto, and find out how Gumby helps the poor King save his only daughter with a 25 cent toy in Sad King Otts Daughter. These claymation masterpieces are just as heartwarming and charming today as they were at their beginning — more than fifty years ago! Its perfect entertainment fun for the entire family!

The 16 episodes included here are: “Tree Trouble”, “Lion Drive”, “Yard Work Made Easy”, “Sad King Ott’s Daughter”, “The Block Heads”, “Gumby’s Concerto”, “The Glob”, “Baker’s Tour”, “The Black Knight”, “The Kachinas”, “In a Fix”, “The Witty Witch”, “The Groobee”, “Gumby Racer”, “Rain for Roo” and “Hidden Valley”. There is a nice combination of episodes from the 50’s and 60’s run of this show. I still remember exactly where I was and what I was doing the first time I saw the episode “Gumby Racer”. That really brought back some fun memories. The episodes are old and aren’t restored at all here but it is great to see them like I remember. Here is a fun fact for horror fans the episode of “Gumby” titled “Clay Play” (not on this release) appeared in an episode of “Freddy’s Nightmares” titled “The End of the World”, also from the 80’s.