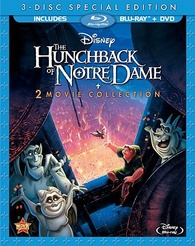 “The Hunchback of Notre Dame” is another one of Disney’s underrated films.  This was released in the mid-late 90’s during introduction of Pixar and their computer generated animated films like “Toy Story”.  “The Hunchback of Notre Dame” didn’t make the cut with its “boring” 2D animation and was not given the respect it deserves.  I love the music in the film thanks to the genius of Alan Menken (“The Little Mermaid”, “Tangled”). Disney has paired this film, which is hitting Blu-ray for the first time with its painful direct-to-video sequel “The Hunchback of Notre Dame II”. The sequel barely runs an hour and is one of my least favorites of the Disney’s mass explosion of direct-to-video sequels. Still though, if you are a fan of the first film then this Blu-ray is surely worth the upgrade to high-definition.

Official Premise: Rediscover the majestic musical adventure of The Hunchback Of Notre Dame and The Hunchback Of Notre Dame II – together for the first time in stunning Blu-ray high definition. Bring your family together for the extraordinary tale of Quasimodo in a soaring celebration of the beauty inside all of us! Join the world’s most unlikely hero as he meets his first real friend, Esmeralda, while fighting to save the people and city he loves. The legendary story continues as Quasi reunites with his gargoyle friends to protect the cathedral’s most famous bell and find true love. The Hunchback Of Notre Dame soars with a magnificent score by renowned composer Alan Menken (Beauty And The Beast, Aladdin). Enjoy both magical films, bursting with brilliant animation and unforgettable characters, together on Disney Blu-ray.

“The Hunchback of Notre Dame” looks very vibrant with its 1080p transfer.  Honestly, though it is not perfect and it feels a little 2D and does pop like other recent classic hand-drawn animated films has.  But that doesn’t mean that it is not impressive.  In fact “The Hunchback of Notre Dame II” believe it or not also looks quite impressive.  Despite the fact that it is not the greatest film, it sure does look sharp even with its direct-to-video features. Both films also include a very impressive DTS-HD Master Audio 5.1 track. The first film contains some wonderful songs and a great score, thanks again to Menken and his work is represented very well here. The second film also packs some songs, not as good, but still sounds very nice with this track. Also I should mention that both films are located on one Blu-ray disc and the additional two DVDs include each film on their own disc.

The special features are disappointing and are simple ports of the films previous DVD releases.  First we have an audio commentary track for the first film with directors Gary Trousdale and Kirk Wise and its producer Don Hahn. Decent track and some decent information shared. “The Making of The Hunchback of Notre Dame” is a decent length featurette with host Jason Alexander and with voice cast Tom Hulce, Demi Moore, Kevin Kline, and Tony Jay and many more talented people who works on this film. There is a “Multi-Language Reel” for the song “A Guy Like You”, which was translates into sixteen different languages. There is “Behind the Scenes with Jennifer Love Hewitt”, which is basically a short interview with actress talking about her role.  Lastly “A Gargoyle’s Life” has Jason Alexander’s character Hugo reciting a poem with clips from the first film.

“The Hunchback of Notre Dame” is not the only animation classic being released on high-def Blu-ray. March 12th will also bring the release of “Brother Bear 1 & 2″, “Mulan 1 & 2″ and “Who Framed Roger Rabbit”, which is celebrating its 25th anniversary. Of course like Disney is smart to release their films like that ”Mulan”, ”Brother Bear” and “Hunchback” with their direct-to-video sequels because otherwise I do not think that anyone would be interested in owning them. So I look at these direct-to-video sequels as a bonus feature really. I am not sure how “Who Framed Roger Rabbit” fits into this trend but that is one release that I am highly anticipating.