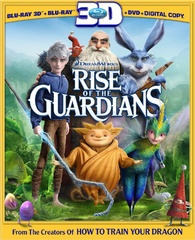 “Rise of the Guardians” is based on author William Joyce’s the “Guardians of Childhood” book series, read our interview with him here. The film was released in theaters and really got a bad rep. I think people don’t really understand why this film wasn’t the biggest animated film of the year. It came out with no competition but luckily it had some great legs nonetheless. I personally wasn’t thrilled the first time I saw it. I liked it but wasn’t blown away…that is because I did not see it in 3D. Wow, what a difference. This film really gets its wings with the addition of the third dimension. It also really has grown on my since. My 9-month also daughter also seems to really like it (not in 3D though, since the glasses don’t fit). But she goes crazy over this gorgeously animated film. If you like Dreamworks other titles like “How to Train Your Dragon”, this isn’t on par for story but production and quality it is.  I would recommend checking this out for sure, especially in 3D if possible.

Official Premise: When an evil spirit known as Pitch Black (Jude Law), the reviled Bogeyman, lays down the gauntlet to take over the world, the immortal Guardians — Santa Claus (Alec Baldwin), the Easter Bunny (Hugh Jackman), the Tooth Fairy (Isla Fisher), the Sandman and spirit of winter Jack Frost (Chris Pine) — must join forces for the first time to protect the hopes, beliefs, and imaginations of children all over the world.

Since their success with “Shrek”, one of the great things that Dreamworks has really delivered consistenly with their animated films is amazing voice casts.  This film really boasts a very fun and colorful cast of actors including Chris Pine, Alec Baldwin, Jude Law, Isla Fisher, Hugh Jackman.  Alec Baldwin is a blast playing good ‘ole Saint Nick.  Jude Law is a fantastic baddie voicing the Bogeyman. Speaking of sound, Dreamworks really delivered one heck of a fantastic Blu-ray presentation here. The Dolby TrueHD 7.1 surround track is a think of beauty.  The film represented so well here with this track, especially the action scenes, which there are quite a few of.  It delivers the dialogue from the voice cast perfectly as well.  I really had to keep adjusting my 7.1 surround sound speakers so that it didn’t rumble my frames off the walls.  The 1080p transfer is also another gem of this release.  The 3D really adds so much wonderful depth to the film. The colors are so prominent and sharp that they literally jump off the screen. If you don’t have 3D Blu-ray, this release also comes with a standard Blu-ray, a DVD and a Ultraviolet Digital Copy. I have to say easily a 5/5 score just for the audio/video on this release.

The special features just continue on the successful path for delivers an impressive Blu-ray release. First off we have a don’t miss – audio commentary track including the director Peter Ramsey and producers Christina Steinberg and Nancy Bernstein.  It gives tons of information about this giant production and is very entertaining. “Behind the Magic” is a great four part feature series to explore the filmmakers’ journey with the look, characters, effects and music, including “Dreaming Up the Look”, “Naughty & Nice: Designing Memorable Characters”, “Enchanting Effects” and “Creating an Epic Score”.  All of these factors are such a part of this film being a success.  “The Man Behind the Guardians” is a feature on the author William Joyce and how his novel is brought to life. “Dreamers and Believers” looks into the the characters of the film with the cast and crew. “Sandy’s Dream Guide” is an interactive guide to interpret your dreams. Lastly there are two additional interactive games that are exclusive to the Blu-ray,  The first is called “Jack Frost Snowball Showdown” and the second is “Rock, Paper, Scissors with Sandy”, both fun for kids to enjoy!