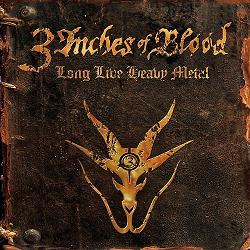 “Long Live Heavy Metal” is the newest album from the Canadian heavy metal band 3 Inches of Blood. The bands 5th full length album was produced by Terry “Sho” Murray and is being released via Century Media Records. The group consists of Cam Pipes, Justin Hagberg, Shane Clark and Ash Peason. Together the band blends a variety of both new and classic metal techniques while still forging new ground.

Vocalist Cam Pipes could be describes as half Halford and half Dickinson as his vocals ring out in the highest of falsetto ranges while tracks like “Look Out” and “Storming Juno” are drenched with dual guitar chugging, and sweeping solo passages.

Though a majority of the songs on “Long Live Heavy Metal” have a more vintage sound and structure, Tracks like “Dark Messenger” and “Die for Gold” feature a unique blend of the two which makes the latest release from 3 Inches of Blood quite an entertaining listen.