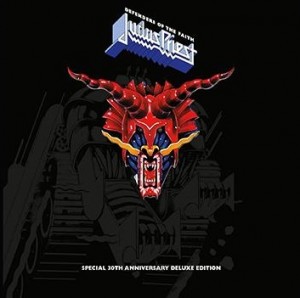 Right of the bat I want to say that if you already have the original version of “Defenders of the Faith” skip this version or go out and track down an original vinyl copy of the album. I found the remastered version of the album to be quite thin with too much emphasis on Rob Halfords vocals. It would have been nice if the newly remastered tracks featured beefed up instrumentation to accompany the metal gods prowess however much of that seemed lost or non-existent. I found the real gem of this release to be the two disc live album which is included as a part of the deluxe edition. Recorded on May 5th, 1984 at the Long Beach Arena the recording captures the band in their element. Not only do you get to hear most of the songs from the Defenders album in a live a setting but you are also treated to classic Priest tracks such as “Electric Eye”, “The Green Manalishi” and of course “Hell Bent for Leather” which includes Halfords signature motorcycle revving. Everything Priest is known for with their live performances is captured on these two discs making it for me the star if the release. Also included is some really cool die-cut packaging and a small booklet with a brief story from the band along with several live photos from the tour.

Though I wasn’t a fan of all the discs from the “Defenders of the Faith” 30th Anniversary Deluxe Edition I found the live portion of this release more than made up for it. So if you are looking this album and want something a little extra then the Anniversary edition is the way to go however, if you are just looking for the studio tracks of songs like “Love Bites” and “Some Heads Are Gonna Roll” then make your way to the nearest record store and get yourself an original release of the album.