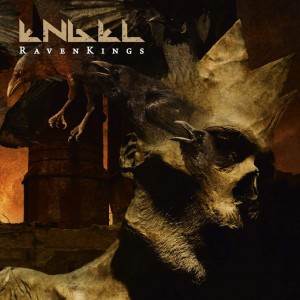 “Raven Kings” is the 4th full length release from the Swedish melodic death metal band Engel. The brain child of In Flames guitarist Niclas Engelin Engel burst onto the world stage in 2007 with their acclaimed debut “Absolute Design” and has strived for progression with each of its subsequent releases. “Raven Kings” is certainly no different and could easily the bands most progressive work yet. The album is being released via Gain/Sony Records and features 11 tracks produced by Engelin and co-guitarist Marcus Sunesson.

Fans of death metal looking for something a little more adventurous will want to take notice of the newest release from Engel. “Raven Kings” seamlessly blends aggression filled rhythm and vocal passages with beautifully orchestrated choruses that keep the listener on their toes. Tracks like “Your Shadow Haunts You” which starts out with tribal like drums and in your face screams instantly gives way to something much more as singer Mikael Sehlin belts out the songs opening line “Break free from all these chains” showcasing his range with almost an operatic type approach.

Don’t let my mention of operatic type lyrics sway your decision any as the band instantly goes back to its death metal roots with tracks like “Denial”, “When the Earth Burns” and the pulverizing “Broken Pieces”. Though I found a few of the tracks to be a bit over produced for my liking the album was a fresh listen that I think will appeal to fans of the genre.