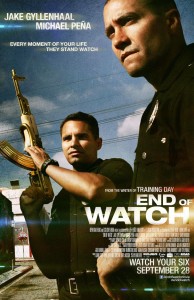 A high speed pursuit leads to a deadly shootout with a quartet of gang bangers, captured clearly on the police car’s video camera. Just another day in Los Angeles.

Several weeks later we join police officers Brian Taylor (Gyllenhaal) and Mike Zavala (Pena) as they return to duty. Currently enrolled in college and taking filmmaking as an elective, Taylor introduces himself by way of a monologue he records before starting his shift. The first day back is also going to be the first day of the rest of he and Zavala’s lives, though even they aren’t aware of that fact.

Told in an often startling documentary style, “End of Watch” is a gritty police drama that benefits from another in a string of outstanding performances by both Gyllenhaal and Pena. Writer/director Ayers is no stranger to the police or South Central L.A., having written such tough urban thrillers as “Training Day” and “Harsh Times.” Here he includes the true camaraderie between the officers that is more like brothers than co-workers. “If anything happens to you I will take care of your children” we hear one partner tell another. And they mean it.

The story starts and ends big with a large slow gap in between. Through happenstance both Taylor and Zavala find themselves in situation that puts them I direct contact with members of a Mexican drug cartel beginning to make their move in America. These are easily the two most exciting cops in L.A. as their duty days progress and they find themselves doing things that most police officers do in an entire career. The characterizations are strong, as is the cast. It’s really only the plot, which seems to come and go when the need serves, that keeps this from being an outstanding film.

All passes have been taken for this RSVP Code. Thanks again and check back weekly for new giveaways!

Open Road Films and MediaMikes.com are teaming up for an advance screening of the upcoming action-thriller END OF WATCH starring Jake Gyllenhaal, Michael Peña, Anna Kendrick and America Ferrera. The film is scheduled to hit theaters nationwide on Friday, September 21st.

All passes have been taken for this RSVP Code. Thanks again and check back weekly for new giveaways!

Passes are limited and are available on a first-come, first-served basis.

SYNOPSIS: From the writer of Training Day, END OF WATCH is a riveting action thriller that puts audiences at the center of the chase live never before. Jake Gyllenhaal and Michael Peña star as young LA police officers who discover a secret that makes them the target of the country’s most dangerous drug cartel. END OF WATCH opens in theaters on SEPTEMBER 21st!

**Rated R for strong violence, some disturbing images, pervasive language including sexual references, and some drug use. 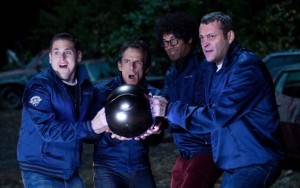 Remember those old commercials for Certs? “It’s a breath mint,” they’d say. No, “it’s a candy mint.” It was really “two…two…two mints in one.” I bring this up because the new film “The Watch” is like a Certs. Actually many Certs.

Evan (Stiller) is the guy every neighborhood has. Friendly and outgoing, Evan is eager to do anything and everything for his neighbors. He prides himself on his diversity. He includes among his friends a man from India and a Korean woman. He still doesn’t have any black friends but he’s working on it. Evan manages the local COSTCO store and seems to have the perfect life. And when tragedy strikes, it’s up to him to…..WHOA! I know just now you re-read this paragraph and mumbled to yourself, “tragedy? I thought this was a comedy.” It is. And a horror film. And a relationship drama. Have a Certs!

Sometimes side-splittingly funny, “The Watch” goes off in so many different directions that the pitch meeting must have sounded like, “it’s “The Burbs” meets “Alien” meets “Men In Black” meets “The Hangover” meets God knows what else. The film seems to have borrowed from every popular genre’ of the past 30 years. Which can lead to a film that’s occasionally hilarious but mostly uneven. The blame for this falls directly on the shoulders of script writers Seth Rogen and Evan Goldberg (who gave us the much better “Superbad”) with an assist from Jared Stern. It’s almost as if they were just throwing out ideas and incorporated them into one story.

On the plus side (the comedy side) the cast is first rate. Stiller has perfected the comic “everyman” persona and is in fine form here. Vaughn also plays off of his strength, that of the wise ass who seems to have everything (think “Old School”). Hill seems to still be in “21 Jump Street” mode as a wanna-be cop regulated to patrolling the neighborhood. Completing the quartet of “watchers” is Richard Ayoade, a very talented Brit filmmaker whose 2010 film “Submarine” was executive-produced by Stiller. Supporting work by R. Lee Ermey and a very creepy (and unbilled) Billy Crudup add to the laughs. On the minus side, you have an alien invasion story that includes some pretty graphic killings. You also have Stiller and his wife trying to have a baby while Vaughn frets about making sure his young teenage daughter doesn’t. I will say this – you get a lot thrown at you in an hour and a half. It’s up to you to decide what to catch. 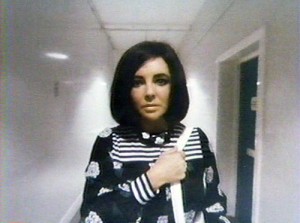 This film is a slow burn psychological tale with a great ending reveal. Elizabeth Taylor is takes on this role of Ellen Wheeler with great success. She involved with a loveless marriage and she starts this obsession that their is murders going on in the house next door. The film is very suspenseful as we slowly fall into Ellen’s world of madness.

This DVD is a wonderful remastering and looks fantastic in its widescreen 16×9 1.78:1 transfer. It is the first time this disc is being released on DVD and it is definitely worth purchasing if you are a fan of this film. The colors are sharp and the sounds is great. There are no extras on this disc like most Warner Bros. Archive releases, but nonetheless they are releasing some great classics. I look forward to their next release.

Synopsis:
Elizabeth Taylor ventured but once into the scarified world of Grande Dame Guignol, and Night Watch is the striking result. Taylor’s matron in menace role is that of Ellen Wheeler, a lonely insomniac trapped in a loveless marriage and by an obsession with a creepy gothic manse next door. One night while indulging in her alcohol fueled ramblings, Ellen spots a corpse inside the vacant house. A corpse that resembles her deceased, two timing first husband…a corpse that no one else thinks exists. Adapted from a play by suspense mistress Lucille Fletcher (Sorry, Wrong Number, The Hitch-Hiker, Night Man), Night Watch re-teams Liz with her Butterfield 8 co-star Laurence Harvey, playing Ellen’s emotionally distant second husband in one of his final film performances. Genre stalwart Billie Whitelaw rounds out the cast.