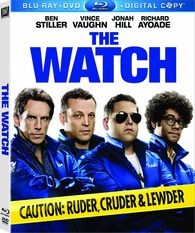 “The Watch” is raunchy hilarious comedy with a nice sci-fi/action twist.  When this film was released in theaters, I literally had zero interest in seeing it.  The marketing on the film was terrible and it just sort of came out of nowhere.  Also it wasn’t sure if it was a comedy or a sci-fi film.  I think they should have just went full alien, “Men in Black”-style.  I wasn’t sure what to expect but this film was a whole shit load of fun.  It was completely over-the-top and offensive but it really delivers a lot of funny moments. This may not be the best film of the year but it was completely overshadowed by superheroes this summer and deserves to be given a chance.

Ben Stiller is great but he is overshadowed by the rest of the cast, who completely out-comedy him. Vince Vaughn is the star of the show and really tears up the jokes. The nesting doll scene is priceless. Every word his says was simply magic.   I can only imagine there were many many multiple takes on the lines.  After “@1 Jump Street”, I was a become a member of the Jonah Hill fan club (no, not literally) but this film just sealed the deal.  I wasn’t familiar with Richard Ayoade prior to this film but he really nailed some good one-liners playing Jamarcus. Will Forte cracked me up as  Sergeant Bressman and R. Lee Ermey has a nice cameo.  Lastly, well known creature-actor Doug Jones plays the role of the alien.

Official Premise: Four everyday suburban guys come together to form a neighborhood watch group, but only as an excuse to escape their humdrum lives one night a week.  But when they accidentally discover that their town has become overrun with aliens posing as ordinary suburbanites, they have no choice but to save their neighborhood — and the world — from total extermination.

“The Watch” comes with a three disc combo pack, with a Blu-ray, DVD and digital copy. The film looks awesome with its 1080p transfer.  Even though there isn’t a lot of special effects in the film, the finale looks sweet.  The DTS-HD Master Audio 5.1 surround track also delivers for the mix of sci-fi and comedy.

The special features are good but not great since the main extra are 12 deleted scenes that fun about 25 minutes. They are unrated and definitely where the “Caution: Ruder, Cruder and Lewder” comes from on the box cover. There is a four minute gag reel that has me literally crying. “Jonah Alternate Takes”  includes various improved takes on Franklin’s lines. “Watchmakers” is a decent making-of behind-the-scene featurette. “Alien Invasions and You” has the cast talking about a real alien invasion. “Casting the Alien” is an faux interview with the “alien” who played the alien. Very funny. Lastly there is a theatrical trailer.