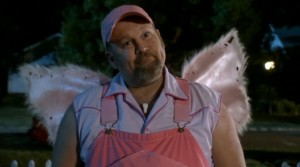 Did the world really need a sequel to “The Tooth Fairy”?  I honestly have no idea why this film was made. More importantly, I just felt really bad for Larry the Cable Guy for having to star in this extremely low budget crappy sequel. The Rock’s “The Tooth Fairy” carried a $48 million dollar budget, I would honestly be surprises if this cost anywhere above $5 million. I wanted to think that this was a least “cute” but it was very painful to watch overall. I think even kids will easily lose attention watching this.

The film follows a child in adult’s clothes, Larry Guthrie, who chooses a bowling tournament over this girlfriend Brooke. He tries to win her back by helping out with her after school program, though he ends up telling a child that the tooth fairy doesn’t exist. That night Larry get’s taken to fairy world and is told that he has to collect ten teeth or he will loose his most precious memory. He continues to try to win back his ex-girlfriend while playing tooth fairy at night.  Overall this was really hard to watch fully through.

The Blu-ray presentation was nothing special at all.  Decent video and audio at best. The special features are useless also just like this movie is. The first is called “Why Do I Lose My Baby Teeth?” and is taught by Larry. “Return to Fairyland – Making Tooth Fairy 2” is a sad behind the scenes featurette. “Larry the Hairy Fairy” features Larry messing around in his tutu. “Introducing Crusher the Pig” focuses on the cute pig from the film. Lastly there are a few deleted scenes and alternate takes, which run about 10 minutes but are only in standard definition.