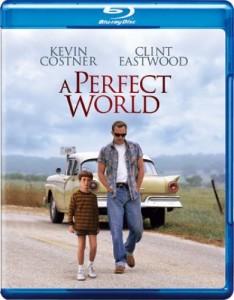 The first film directed by Eastwood after he won his much deserved Oscar for “Unforgiven,” A Perfect World” is a great cat and mouse game pitting two of the best, Costner and Eastwood, at the top of their game. Costner is Butch Haynes, an escaped convict who, among his adventures, adds kidnapping to his list of charges when he abducts 7-year old Phillip “Buzz” Perry. As the two keep one step ahead of the law, led by U.S. Marshall Red Garnett (Eastwood) they discover they have a lot in common.

Thanks to a tight script by John Lee Hancock and Eastwood’s always steady direction, “A Perfect World” is an emotional roller coaster with Costner giving one of his best performances. The presentation is top notch, which is to be expected on Blu-ray. The only extra on the disc is the theatrical trailer. What a disappointment. Both Eastwood and Costner had won directing Oscars in the few years preceding and it would have been a treat to eavesdrop on two acclaimed filmmakers while they worked together.

Synopsis: Academy Award winners* Kevin Costner and Clint Eastwood confront each other from opposite sides of the law in A Perfect World, an acclaimed, multilayered manhunt saga (directed by Eastwood) that rumbles down Texas backroads toward a harrowing collision with fate. Costner plays Butch Haynes, a hardened prison escapee on the lam with a young hostage (T.J. Lowther in a remarkable film debut) who sees in Butch the father figure he never had. Eastwood is wily Texas Ranger Red Garnett, leading deputies and a criminologist (Laura Dern) on a statewide pursuit. Red knows every road and pothole in the Panhandle. What’s more, he knows the elusive Haynes ? because their paths have crossed before.