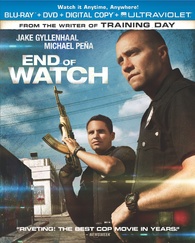 Wow, I cannot believe it took me this long to see this movie. I never gave “End of Watch” a second look when it was in theaters last Fall, but boy was I missing out. This film has some amazing and powerful performances from both Jake Gyllenhaal and Michael Peña, where are the Oscar nods?! The film is from the writers of “Training Day” and he really captures the same essence that he did with that film. The film is raw, gritty, in-your-face and very powerful. It is also a little bit scary to think that certain areas of the world are really like this. I liked the hand-held camera aspect to the film as well, since it really added the fly-on-the-wall feeling, which I really dug. Literally, this is one of the best films of 2012 and easily one of the most impressive and rawest cop films in years.

Official Premise: From the writer of Training Day comes a gripping, action-packed cop drama starring Academy Award nominee Jake Gyllenhaal and Michael Peña. In their mission to abide by their oath to serve and protect, Officers Brian Taylor (Gyllenhaal) and Mike Zavala (Peña) have formed a powerful brotherhood to ensure they both go home at the end of watch. But nothing can prepare them for the violent backlash that happens after they pull over the members of a notorious drug cartel for a routine traffic stop. Seen from the point of view of the officers, gang members, surveillance cameras, dash cams and citizens caught in the line of fire, a 360 dergree perspective creates a gritty, compassionate and intense portrait of the city’s darkest streets, and the brave men and women patrolling them.

Universal delivered “End of Watch” with its typical yet very impressive Two-Disc Combo Pack.  It includes the following: Blu-ray + DVD + Digital Copy + Ultraviolet.  That Ultraviolet code was immediately redeemed and will be used and revisited as often as I can. The 1080p transfer on the Blu-ray looks sharp even though the film is so gritty and made to feel like it is shot using handhelds. The DTS-HD Master Audio 5.1 surround track on the Blu-ray is just as raw yet effective as the film. You literally find yourself dodging the bullets during the shootouts. Both audio and video are very impressive.

The special features on this release are not good in quantity but pack some good quality.  There is a fantastic audio commentary track from writer/director David Ayer.  He really adds great depth to the film and gives a lot of great insight. There are a hella lot of deleted scenes included here, in fact there are almost 50 minutes of deleted scenes.  Yes that’s right 50 minutes.  It is a mixture of eighteen deleted scenes and various alternate takes.  As much as I enjoyed the film itself, I loved some of the longer deleted scenes and a few of them would have really worked in the final product.  Lastly, there are five featurettes summing up the extras but they are very short and disappointing. They consist of  “Fate with a Badge,” “In the Streets,” “Women on Watch,” “Watch Your Six” and “Honors”, which consist of two-minute looks into the production with the cast and crew.