Meet iconic Star Wars™ characters such as Lando Calrissian and Luke Skywalker in Star Wars™ Jedi Knight II: Jedi Outcast, where you play as the Jedi Kyle Katarn, employing a unique mix of weapons, Force™ powers and your lightsaber™ in single-player first- and third-person action. Follow an ancient tradition and learn the powers – and dangers – of the Force™ in Star Wars™ Jedi Knight: Jedi Academy, a single- and multiplayer action combat game.

A Jedi outcast struggles with his past, his enemies, and his destiny. Kyle Katarn’s classic adventure lands on Nintendo Switch™ and PlayStation®4! Experience the legendary single-player epic with modernized controls.

Forge your weapon and follow the path of the Jedi. The online multiplayer classic comes to Nintendo Switch™ and PlayStation®4 with modernized controls. Take on the role of a new student eager to learn the ways of the Force from Jedi Master Luke Skywalker.

About the Star Wars™ Racer and Commando Combo

The fan-favorite racer is back! Two engines. One champion. No limits. Take control of a podracer speeding through flaming methane lakes, Tusken Raider assaults, anti-gravity tunnels, and much more in a pulse-pounding, do-or-die fight to the finish line.

The squad is your weapon. Boss, Fixer, Scorch, and Sev, better known as Delta Squad, are back on Nintendo Switch™ and PlayStation®4! Relive the legendary campaign.

Aspyr is a leading video game publishing and development partner focused on maximizing the potential of games across all platforms and for all players. Today, the company supports a growing network of partners that includes many of the industry’s leading entertainment IP holders, publishers, developers, and technology providers. Aspyr is based in Austin, Texas. For more information, visit www.aspyr.com.

All copyrights, trademarks, logos and brands are the property of their respective owners.

STAR WARS and related properties are trademarks and/or copyrights, in the United States and other countries, of Lucasfilm Ltd. and/or its affiliates. © & TM Lucasfilm Ltd.

Have you ever wanted a stuffed plush dog that actually walked around with you. Well, no lie, no gimmick. That is what the “Peppy Pups” does. It is kid powered dog toy that includes a collar and leash. You walk and the dog walks with you. It is simple and no batteries are needed. This is an awesome idea for a kids toy because it gets them up and on their feet and away from all electronic devices.

Here is some details about what is sure to be one of this holiday season’s hottest toys: “The only cuddly plush that can run, jump, wag its tail and interact with children like a real dog, TPF Toys’ Peppy Pups are brimming with personality and inviting cuddles with its fluffy tail and soft tuft of hair. Peppy Pups feature charming collar and bone tag, and branded paw pads. Eager to move and shake just like a real dog, Peppy Pups spring, bounce, jump, waddle and grove; turning heads as they go — no batteries needed!

Peppy Pups is the soft and cuddly friend your child has been looking for, without the responsibility or commitment of a regular puppy! This walking dog toy has pep and bounce in his step wherever your child decides to walk him, making him a lively, enthusiastic companion. Let your little one use the leash so he can walk-along in the park, on the sidewalk, or even in the house. With a fluffy white tail and a snuggly coat, Peppy Pup will be easy to love and cuddle, just like a real puppy. This little stuffed toy features a silly facial expression, and he can even perform tricks, like flips. Peppy Pup will be your child’s best friend.”

So if you are tired of your kids opening their presents this holiday season and then spending hours putting the toys together or not having the required thousand of batteries they need to operate them, then the Peppy Pups is a great solution for your shopping needs!

SANTA ANA, Calif., June 10, 2014 — Little Orbit, a worldwide video game publisher, unveils the   ultimate dragon racing experience with the release of How to Train Your Dragon 2 video games based on Friday’s highly anticipated 3-D animated film from DreamWorks Animation.   Developed by Torus Games, the game is now available on the Xbox 360®, Nintendo Wii™, Wii U™ and PlayStation® 3.

Dragon trainers will put their skills to the test in this high-flying adventure featuring Hiccup and Toothless and other fan favorite dragon and rider teams, high-energy tournaments and all the fire-breathing fun as they explore the dynamic Island of Berk.  Along the way, players will face multiple challenges in this heroic quest as they play their way through an epic world of Dragons and Vikings.

“The How to Train Your Dragon 2  video game is one of the biggest and most exciting launches Little Orbit has ever had, and we are so excited for fans of this beloved franchise to take flight and experience the game,” said Matt Scott, President of Little Orbit.

Eager fans should keep their eye out for Dragon-wrapped Redbox kiosk as How to Train Your Dragon 2 video games “take over” Redbox locations across the country beginning this week!  Xbox 360, Nintendo Wii, Wii U and PlayStation 3 rentals will be available throughout the summer at most Redbox locations.

DreamWorks Animation’s How to Train Your Dragon 2 is in theaters nationwide in just a few short days on June 13, 2014!

To get the latest news on the How To Train Your Dragon 2 video games and more, follow Little Orbit on Twitter (@littleorbit) or visit the official Facebook page at https://www.facebook.com/LittleOrbitGames 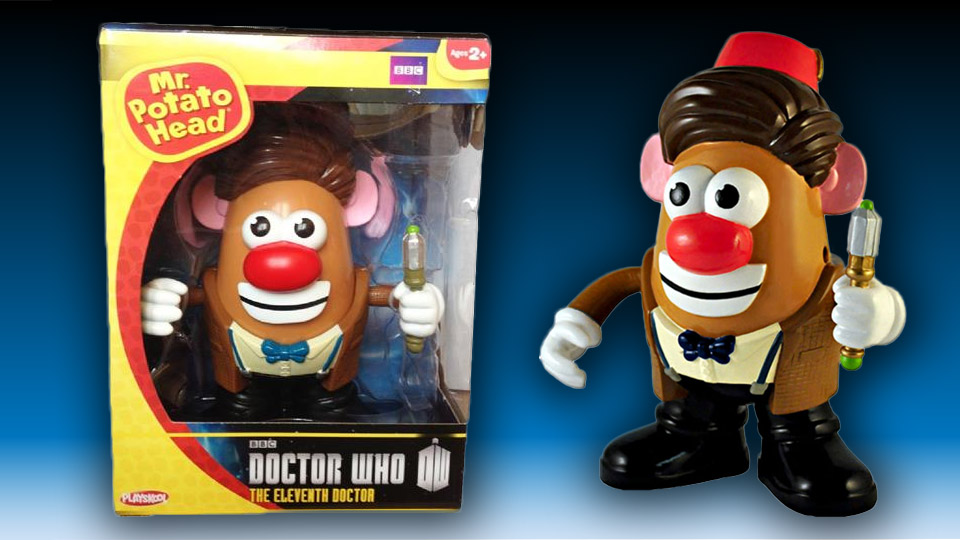 If you are a big “Doctor Who” fan like myself and completely obsessed with any merchandise available. Then you will be psyched to know that the officially licensed “Doctor Who” Mr. Potato Head Doll for the Eleveenth Doctor recently hits stores! Click here to purchase from BBCSHOP.com!

The Eleventh Doctor as played by “MASH” Smith! Hop in the TARDIS with Mr. Potato Head as he pays homage to the last known survivor of “Galli-Fry”, DOCTOR WHO in his quirky eleventh incarnation! Set comes complete with 8 removable parts and pieces.

It’s somewhat appropriate that the Doctor is now Mr. Potato Head — he does change his face, body, and accessories often enough. Though, he’s not a root vegetable. He’s probably met a few, though!

Michael Jackson:
The Life of an Icon

Universal City, CA, September 6, 2011 – Prepare to go behind the headlines as Michael Jackson’s mother Katherine, brother Tito, sister Rebbie and more than fifty friends, peers and associates share intimate and fascinating stories about the singer’s illustrious life.  Directed by Andrew Eastel and produced by television star David Gest, Michael Jackson: The Life of an Icon is not only a celebration of Michael’s life, but also a powerful behind-the-scenes account of the star’s early years with the Jackson 5, his rise to global solo-stardom through to the final moments before his sudden death in 2009.  Available on Blu-ray™ and DVD on November 1st 2011 from Universal Studios Home Entertainment, the release also features performance footage as well as never-before-seen family photography.

Michael Jackson: The Life of an Icon features multiple interviews with Katherine Jackson as she shares her memories about Michael’s upbringing in Gary, Indiana, provides insight into his relationship with father Joe, shows her support for her son during the court cases he challenged and gives her thoughts on the life he faced afterwards.  Rebbie Jackson recounts the star’s childhood, his extraordinary bond with mother Katherine and his decline in later years and Tito Jackson provides an in-depth look into Jackson’s history and what his family went through during Jackson’s sensational trial in 2005.

Producer David Gest has pieced together the most important facts about Jackson’s life based on unseen first-hand accounts he has recently recorded with an important group of people who knew the star well.  In addition to celebrating his many achievements as the biggest selling artist of all-time, the film will finally answer some of the speculation surrounding Jackson’s life.

Also included in the show is rare, in-studio and live television performance footage of Michael Jackson and the Jackson 5 as well as unforgettable original music from the Motown period by Michael, the Jackson 5 and other artists who Jackson respected and was influenced by. The soundtrack includes more than twenty-one classic tunes.