Halloween is right around the corner and what better way to celebrate with your young kids than with kid friendly spooky stories with their favorite Disney characters. This is not Disney’s first time around with the % Minute Stories as recently they have released “5-Minute Marvel Stories”, “5-Minute Princess Stories”; “5-Minute Snuggle Stories” and “5-Minute Disney*Pixar Stories”. These are a great fun for the kids and listen up parents, they are great for bedtime. I probably wouldn’t recommend the spooky stories before bedtime but these are still great fun and original stories from our favorite character like “Wreck-It Ralph”, “Tangled” and “Sleeping Beauty”.

Official Premise: The perfect treat for Halloween, this treasury of spooky stories is packed with thrilling adventures. Beloved favorites like Mickey Mouse and Peter Pan as well as popular new characters from the latest Disney films, including Wreck-It Ralph and Rapunzel, encounter everything from ghosts to haunted houses! With twelve scary stories, a padded cover, and fun illustrations on every page, this collection is a great gift for boys and girls. Plus, each of these spooktacular stories can be enjoyed in just five minutes, making it perfect for bedtime, on the go, or anytime!

I have no idea how or why but my two year old daughter absolutely loves Halloween. Every since her first Halloween when she was around six months we would take her pumpkin picking, so I guess it rubbed off. Funny also, here favorite TV show on Disney Junior is “Mickey Mouse Clubhouse”, so this book is a great combination of both.

Official Premise: Mickey Mouse has decorated his whole house for a Halloween party. But when Minnie, Donald, and the others show up, they can’t find Mickey. Instead they just find one scary thing after the next! This gently spooky storybook is perfect for Halloween.

The book is quite big and meaty for the kids. The pages are hard stock and work well with those little hands that are unable to turn paper pages. To make things even more impressive, there is also a great Mobile App included for iPhone and iPad! “Read and Play”. 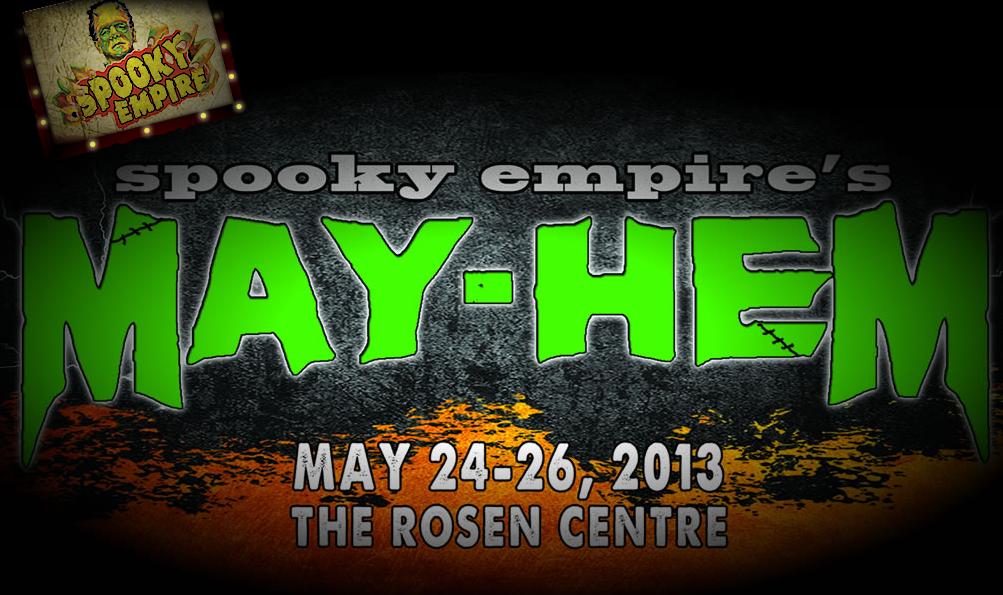 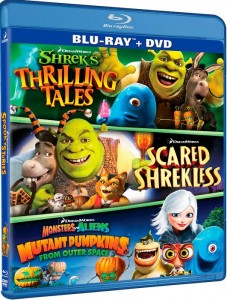 “DreamWorks Spooky Stories” arrives just in time to celebration Halloween.  This release features six shorts and included two new season’s themed specials from “Shrek” and “Monsters vs. Aliens” series.  In “Shrek’s Thrilling Tales”, we get three tales including “Shrek: The Ghost of Lord Farquaad” and the new shorts “Shrek: The Pig Who Cried Wolf” and and “Monsters vs. Aliens: Night of the Living Carrots”, There is also more Shrek goodness in “Scared Shrekless”.  “Monsters vs Aliens: Mutant Pumpkins from Outer Space” is last but not least. This is a great collection for kids to get in the mood for Halloween with their favorite Dreamworks characters.

“Shrek’s Thrilling Tales”: Join Shrek, Donkey, Puss and B.O.B as they get the fright of their lives in three spooktacular stories that will keep you howling with laughter. This Shrektastic Halloween treat includes The Pig Who Cried Werewolf, Night of the Living Carrots and The Ghost of Lord Farquaad.

“Scared Shrekless”: Halloween is Shrek’s favorite holiday – but instead of the usual tricks or treats, Shrek ups the ante and challenges the gang to spend the night telling scary stories. The last one to be Scared Shrekless wins. And don’t miss the Shreked-out parody of Michael Jackson’s “Thriller.”

“Monsters Vs. Aliens: Mutant Pumpkins From Outer Space”: The gang is back as special operatives dispatched to investigate a mysterious alien presence on Halloween. As the night unravels the innocent-looking pumpkins are revealed for what they really are – mutant aliens! Luckily the Monsters are there to smash the mutants’ wicked scheme to take over Earth.

The Blu-ray presentation on this release is extremely impressive. Each special is presented in 1080p high definition and looks fantastic. I am even more impressive though with the Dolby TrueHD 7.1 track included on the special except “Mutant vs. Aliens: Mutant Pumpkins from Outer Space” & “Shrek: The Ghost of Lord Farquaad”, which have Dolby True HD 5.1.  They all sound really fantastic and gave my surround sound a nice workout. There is not much additional extras included here though.  There is an optional pop-ups on “Night of the Living Carrots”. The World of DreamWorks Animation featuring previews and a few music videos. Still this is worth the purchase to get ready for the holiday season! 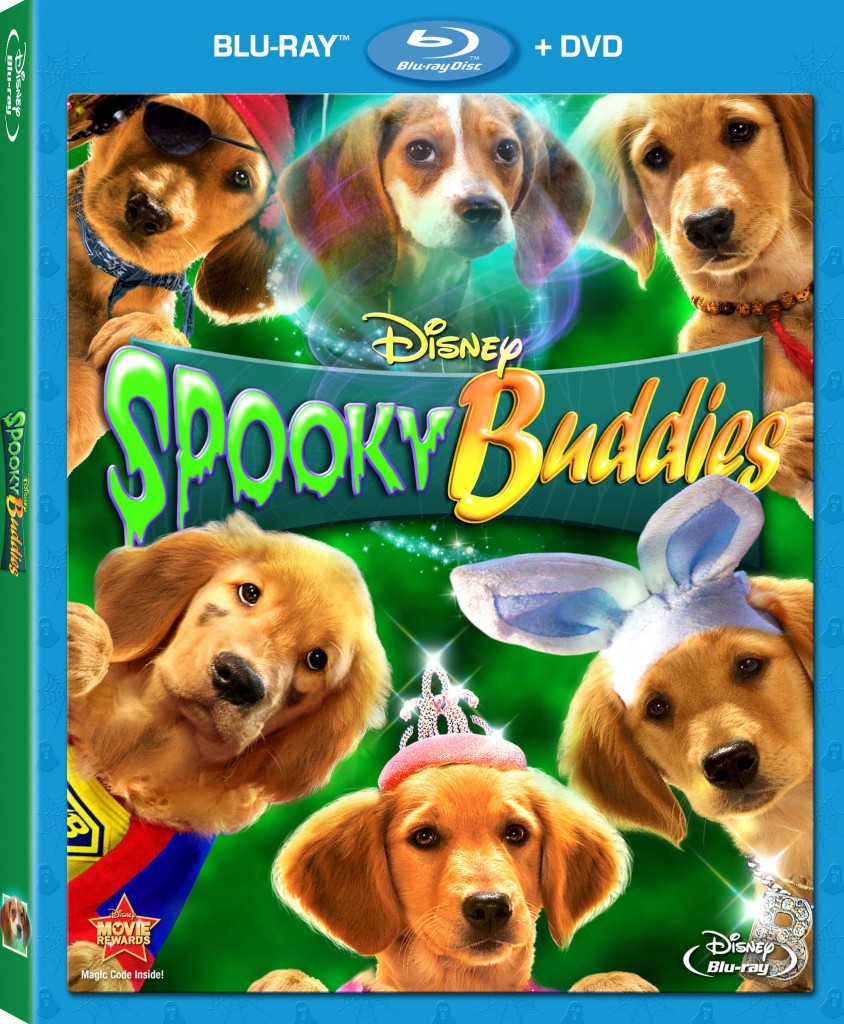 To celebrate Disney‘s Most Popular Live-Action Direct-to-Video Franchise release of “Spooky Buddies”, Media Mikes would like to giveaway 10 copies of the Blu-ray™ Combo Pack (Blu-ray™ + DVD). If you would like to win this great prizes, please leave us a comment below or send us an email and let us know your favorite talking animal movie. This giveaway will be open until Friday September 26th at Noon, Eastern Time and is only open to residents of the United States. Only one entry per person, per household; all other entries will be considered invalid. Once the giveaway ends, Movie Mikes will randomly pick out winners and alert the winners via email.

Overflowing with trick-or-treat action, the ?Buddies‘ films are favorites of families and kids of all ages. Spooky Buddies continues the overwhelmingly popular franchise that features the adorable talking puppies, with action, laughs and fast-paced adventure. In this latest movie caper, the lovable canine clan find themselves in a mysterious mansion, with no less than the fate of the world hanging in the balance as they must stop a dastardly warlock from his plans for world destruction. Packed with fun, excitement and a bag full of bonus features, Spooky Buddies is a spooktacular feature-length movie that treats audiences to a celebration of friendship and teamwork for the whole family.

Bonus Features for Blu-ray™, DVD & Movie Downloads:
DIGS: Rosebud Edition — Leo Howard of Disney Channel‘s Leo Little‘s Big Show interviews Rosebud, the only female pup in the Buddies litter, as she invites viewers into her dream home for an exciting tour. Highlights include the creative use of the color pink throughout her décor, her blush-colored car – the perfect vehicle for the ultimate blond driver – and her fabulous closet holding luxurious garments, and some costumes that fans may recognize from past adventures.
All-New Music Video “Monster Mash” — A fun new Hip hop cover of this Halloween classic introduces the popular song to a new generation of trick-or-treaters with a high-energy new routine performed by Davis Cleveland, Adam Irigoyen, and Kenton Duty from the cast of Disney Channel‘s Shake It Up.