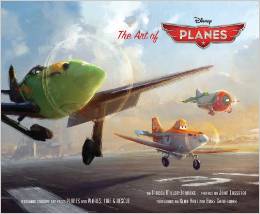 Disney’s “Planes” is an interesting topic, since it was never really made originally be a big theatrical series. It was originally set for direct to video release to cash in on the success of “Cars”. Of course, it got some traction and took off into theaters and did fairly well. I do not think anyone was really dying to see a sequel thought, especially barely a year later. Personally, I haven’t even seen “Fire and Rescue” yet. Nonetheless, these are still very pretty films and I am sure a lot of work went into making them, so if you enjoy the films though, the book is a decent companion.

Official Film Premise: In Disney’s Planes and Planes: Fire and Rescue, the big-hearted crop duster Dusty Crophopper is full of dreams. In the first film, he overcomes his fear of heights to win the Wings Around The Globe Rally. In the second, Dusty learns his damaged engine will keep him from racing, but he finds the true hero within himself working alongside firefighting aircraft on a courageous wildfire air attack team.

Even though this film is not made by Pixar, it still has that certain look but doesn’t have the same heart. The book “The Art of Planes” looks into some of the concept art from the development of these two films. There is some focus on colorscripts, storyboards, character studies, sculpts, background art, and more. I would have liked to see a little more focus on the characters and a little less on the environments. There is also insider insights from the films’ artists and filmmakers. There is a nice preface included from the film’s directors Bobs Gannaway and Klay Hall. Of course, there is a foreword from the man himself, Chief Creative Officer John Lasseter, who gives insight into the creation of these films.