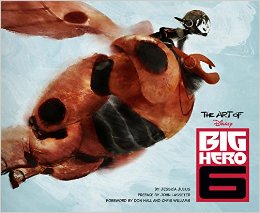 If there is one movie that I am excited to see this fall it is easily “Big Hero 6”. Walt Disney Animation Studio has been delivering some of the best product recently including “Tangled”, “Wreck-It Ralph” and “Frozen” and even wiping the floors with Pixar’s lackluster recent films. “Big Hero 6” looks like yet another winner for Disney. The animation in the film is so colorful and vibrant. The book is a little heavy in character designs and less in the high-tech city of San Fransokyo the film is based in. If you are looking for a great behind-the-scenes look into this film, Chronicle Books has done it again!

Official Premise: Walt Disney Animation Studios’ Big Hero 6 is the story of Hiro Hamada, a brilliant robotics prodigy who must foil a criminal plot that threatens to destroy the fast-paced, high-tech city of San Fransokyo. This new title in our popular The Art of series, published to coincide with the movie’s U.S. release, features concept art from the film’s creation—including sketches, storyboards, maquette sculpts, colorscripts, and much more—illuminated by quotes and interviews with the film’s creators. Fans will love the behind-the-scenes insights into Disney’s newest action comedy adventure.

The author of the book Jessica Julius is also a creative executive at Walt Disney Animation Studios. She has worked on such films as “Frozen”, “Tangled”, “Wreck-It Ralph”, “The Princess and the Frog”, and “Bolt” aka all of my favorites in the last decade. So if you looking for a good inside look, she is definitely a trusted source for the topic at hand.  John Lasseter gives a great preface to the book. Co-directors of “Big Hero 6”, Chris Williams and Don Hall serve up a fantastic foreword as well. I really enjoyed reading this book and I have a feeling that I am going to enjoy it even more getting to revisit once I have seen the film.