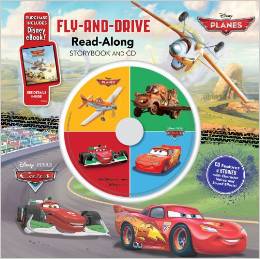 The World of “Cars” is such a vast world created by Disney and Pixar. When “Cars” was released, I do not think that anyone knew how popular this franchise would be well beyond the films itself. When they expanded that world into the sky with “Planes”, I guess you can quote the saying “The sky was the limit” but in this case it really wasn’t. “Cars / Planes: Fly-and-Drive” is a combo of the two franchises into one Read-Along Storybook and CD.

This action-packed set includes four thrilling stories narrated with sound effects and character voices: “Cars”, “Cars 2”, “Air Mater”, and “Planes”. These stories are fun and if your kids love “Cars” and “Planes”, they are doing to love this book for sure. I do not think that I can get enough of these two franchises right now. Plus with the release of “Planes: Fire & Rescue” coming this July, I say keep it coming! As an added bonus, you also get a new eBook for “Planes: Fire and Rescue” includes as well.